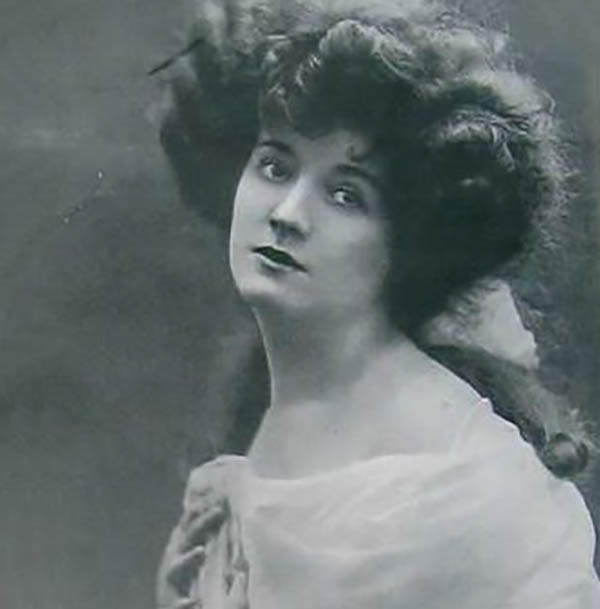 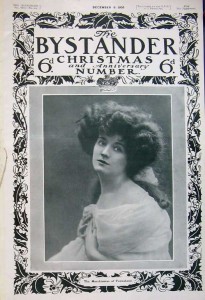 Marchioness Townshend on the cover of The Bystander, 1905.

An exception for scenarists in the early period of British cinema, Townshend was given full credit on all her scenarios. None of the films survive, but we can assume that Townshend’s eight scenarios form her complete scenario oeuvre. All of the motion pictures she wrote were made for Clarendon, one of the seven major British companies at that time; all were directed by Wilfred Noy; and the main actress was always Dorothy Bellew. In her autobiography, Townshend writes that she entered into an arrangement with Clarendon in 1912 “to produce a series of picture plays,” adding that “these were the first cinematograph dramas to give the author’s name, and I was the first peeress to write for the Cinema” (39). In Great Britain, Clarendon was certainly among the first companies to credit their writers, but the fact that Townshend was a peeress was undoubtedly the main reason that she was credited at all. In her autobiography, Townshend actually only refers to seven film scripts and omits Behind the Scenes (1913). This film was reviewed in the Bioscope, but received less attention and therefore the Bioscope itself refers to The Convent Gate (1913) as Townshend’s third film. Looking back, she saw her visibility as a boon in the first decade: “When I see the enormous development of the Cinema to-day I am glad I broke through the barriers of anonymity” as a gesture to future writers for the screen (41). The trade press was also impressed by Townshend’s involvement in a new film industry seeking respectability. The Kinematograph Monthly Film Record confirms that she was an asset, writing in 1913 that “there is a distinct drawing power in a poster announcing the fact that a certain play is from her pen” (148).

Yet this quote also reflects an ambivalence on the part of the trade press towards Townshend’s scenarios. Each of her eight films was reviewed extensively with long descriptions of the story lines, in which, as noted by the Bioscope in 1914, “plausibility has been sacrificed to the exigencies of melodrama” (671). Even Townshend herself, in 1937, comments that her scenarios “sound most melodramatic now” (41). However, the first four films she wrote were received with well-wishing enthusiasm, but when Clarendon held a joint trade show for her three 1914 films, they were reviewed as one, suggesting a similarity in both form and content. The Bioscope review reveals a certain weariness with these “somewhat conventional” films that they perhaps felt obliged to like. Townshend’s final scenario for When East Meets West (1915), in which a fakir uses hypnotism to explode light bulbs filled with poisonous gas from a distance in order to rob unsuspecting Westerners, was again well-received in the Bioscope, but this time was not accompanied by enthusiastic trade show announcements (569–571). The Kinematograph and Lantern Weekly, however, commented that the film “tells quite a fascinating story,” but only when “admitting, for the purposes of the play, an hypothesis that is obviously inadmissible” (49). It would appear that, while grateful for Her Ladyship’s interest in motion pictures, the trade press was not so impressed with the quality of her scenarios. The oddity of her position as both aristocrat and industry worker comes through in the deferential attitude of the press. For instance, the Bioscope in July 1914 relates how she “kindly granted” them an interview, and promises that actors in her future films would have “the advantage of Lady Townshend’s personal supervision and advice,” awarding her a symbolic status that did not go with the job (429-431).

What distinguishes Townshend’s scenarios is that all were written originally for the screen. For example, The Love of an Actress (1914) featured the novelty of a film actress who falls in love with a Lord when her company makes a film on the grounds of his country house. Scenarios in this period were often barely worked-out ideas, but Townshend seems to have given her work an unusual amount of creative attention. In her autobiography she writes that she had “built a small model theatre” for which she used “figures cut from illustrated newspapers, and photographs and cardboard buildings,” and for The Convent Gate (1913), she even arranged scenes in her garden with “cut-out figures of nuns in cardboard” in an effort to imagine the scene (40). The Bioscope review enthusiastically saw the film as “the work of an author who has imagination and a true appreciation of dramatic effect,” who especially understands the “requirements of the camera” while other scripts were only “made to order” (429-431).

Just before the joint trade show of The Love of an Actress, Wreck and Ruin, and The Family Solicitor in July 1914, Townshend revealed in the Bioscope interview that she had just signed another contract with Clarendon to write six more films. This may be the contract she refers to in her autobiography when she explains that “I was paid ?300 for writing six film plays” (40). Only one other film, When East Meets West, however, was eventually made, assuming that she did not count the three 1914 films. In the same interview, Townshend mentions that she had written “one or two costume plays” that remained unproduced because there was no interest in that genre. Unfortunately, the case may have been that there was no more interest in Townshend’s scenarios in a rapidly changing film industry. Although her scenarios should perhaps have started a development of more original scripts, the British film industry, in the years during World War I, began to focus on making adaptations of novels and plays as a way to make cinema-going more respectable. Townshend, however, had stated in her interview that “I do not care to see the stage adapting itself to the film, for neither great plays nor great actors can always be represented adequately on the screen” (430–431). But Townshend’s status was no longer required since the status of British film was improving by other means.

McKernan, Luke. “Interview with the Marchioness Townshend.” The Bioscope: Reporting on the World of Early and Silent Cinema (9 June 2007): n.p.  http://bioscopic.wordpress.com/2007/06/09/interview-with-the-marchioness-townshend/

Terpstra, Mirte. Girls from the Sky:; A Critical Catalogue of Women in the Production of British Silent Cinema, 1914-1918. Nottingham: Univ. of Nottingham, 2006.

1. Marchioness of Townshend as Screenwriter