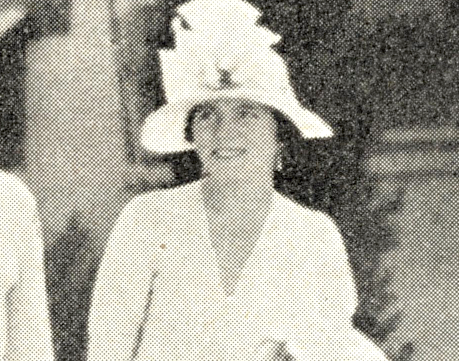 Gurly Drangsholt is the first woman we know who played a role behind the camera on a Norwegian feature film production during the silent era. True or false? She is known for her collaboration with Harry Ivarson on the screenplay of the crime film Madame Besøker Oslo/Madame Visits Oslo (1927), based on a work by Alf Rød. The film was directed by Ivarson and premiered on October 17, 1927. However, in the surviving premiere program, Drangsholt is also credited as assistant director and head of production, credits confirmed in Lars Braaten’s Norwegian filmography. Madame Besøker Oslo, in which two swindlers try to steal the property of a wealthy banker who has died while abroad, is categorized as both crime comedy and crime drama. The heir and nephew, played by Erling Drangsholt, Gurly’s husband, succeeds in bringing the swindles to light. The film was a departure for the small Norwegian film industry. Norwegian films made in the 1920s were set in a vague past and in what could be called national-romantic surroundings. Madame was marketed as something different: “Norwegian film takes a new road,” cheered the periodical Filmen og Vi/The Film and Us in a September 1927 preview article. The article asks if Norwegian film has at last matured, observing that Madame leaves the peasants and the countryside behind and is instead set among the luxurious estates along the Oslo fjord with sailing yachts, riding horses, cars, and Norway’s famous Hankø Regatta. Even a private airplane is part of the action, this indicating the distance from the typical Norwegian film set in a beautiful but modest and traditional countryside.

Archival sources for information about Gurly Drangsholt are few. Apart from the premiere program and a few clippings, there is little primary material on her in the folder on Madame Besøker Oslo in the Film Documentation Division of the Norwegian National Library, and there are no entries on her in Norwegian archive publications. However, her role behind the camera is briefly commented upon in a Filmen og Vi/The Film and Us article, most likely from later in 1927. Drangsholt is here presented as a woman of many skills, a woman of ambitions who wants to learn more. She had already left for Hollywood before the October 1927 Oslo premiere, and the article anticipates that she will return a full-fledged film director, imaging her as the third female director in the world behind Lois Weber and Dorothy Arzner, who the article cites as the only women film directors. The Madame Besøker Oslo folder also contains an undated article from the evening newspaper’s magazine A-magasinet focusing on the use of aeroplanes in film. Erling Drangsholt, interviewed about his breathtaking jump from an airplane in Madame Visits Oslo, mentions that his wife is currently in Hollywood, leading us to conclude that the article appeared soon after the premiere of Madame Besøker Oslo. Erling Drangsholt is quoted as saying that he always admired jumps from airplanes in American movies and that he had asked his wife to investigate the possibilities further during her visit to Hollywood. 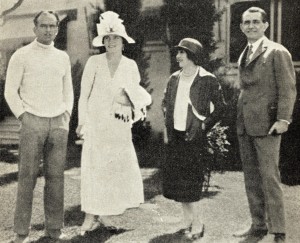 This 1927 trip would not have been Gurly Drangsholt’s first trip to Hollywood, as it followed another, two years before, in which both Erling and Gurly were welcomed by so-called Hollywood “royalty.” Much can be gleaned by studying photographs from the trip held by family members as well as those published in Reidar Lunde’s 1943 biography of Erling Drangsholt. In one published photograph from 1925, Erling appears with Douglas Fairbanks and Mary Pickford outside their home, but the second woman in the photograph is unidentified (Lunde 1943, 26). But on the identical photograph held in the private collection of Gurly Drangsholt’s grandson, the second woman is identified as Erling’s wife Gurly. Also in the grandson’s album are several photos of the Norwegian couple pictured together with other Hollywood actors and actresses in different settings, giving the impression that on the first trip, their stay was relatively long. A photograph from New York tells us that the couple also brought their four-year-old son with them on the 1925 trip to the United States.

But how did this couple with no motion picture experience in 1925 get to meet the inner circles in Hollywood? One could conjecture that it was enough to be Scandinavian at a time when Mauritz Stiller and Greta Garbo entered Hollywood, and director Victor Sjøstrøm was already a success. Or perhaps the Drangsholt couple made this contact through the Norwegian actress and dancer Lillebil, with whom Erling had appeared on the Oslo stage. Or, Lillebil’s husband Tancred Ibsen, grandson of both the writer Henrik Ibsen and the writer Bjørnstjerne Bjønson, might have made the introductions since Tancred had in 1924 joined the writing department at Metro-Goldwyn-Mayer. The Drangsholts’ grandson suggests that the Drangsholts may have met important people in Los Angeles through Gurly’s father, the Norwegian engineer Severin D. Anker-Holth, who had been living there since 1920.

Anker-Holth first travelled to Chicago in 1878 as a newly educated engineer. After several technological achievements, such as a milking machine and separator as well as caterpillar tracks for ploughing successfully adapted for tanks during World War I, he returned to Norway in 1889, the year after Gurly was born. The Anker-Holth family moved back to Chicago in 1901 with eleven-year-old Gurly. Fifteen years later, the Anker-Holths returned to Norway and remained until 1920, when Gurly, thirty years old, married Drangsholt. Anker-Holth then settled permanently in Los Angeles (Bjork 1947, 42).

Biographical material on Severin D. Anker-Holth tells us that Gurly spent the first fifteen years of her life in the US and confirms that he was a famous inventor and engineer and that he lived near Los Angeles beginning in 1920 (Bjork 42). This supports the idea that Gurly’s father may have played an important part in the couple’s visit to Hollywood in 1925. Additionally, the second trip to Hollywood that she made alone in late 1927 may have been motivated both by her interest in film production and by a desire to visit her parents.

In 1936 Gurly and Erling divorced and Gurly settled in San Pedro, California. During World War II, she worked as head of dressmakers for the Norwegian government in Little Norway, Canada, making the uniform worn by the Norwegian prince who later became King Harald, a dress suit visible in patriotic photographs of the royal family. But she returned after the war not to Norway but to Southern California. Gurly last visited Norway with her new husband, Hamilton Murray, in 1956, four years before her 1960 death in La Paz, Mexico. We are left with many questions. What was her role during the production of Madame Besøker Oslo? Did she actually travel to Hollywood in 1927, or did she only visit her parents? If she did make Hollywood her destination, was she able to improve her film production skills, and if so, how was she met when she returned to Norway and a somewhat disintegrated and unstable Norwegian film scene?

With additional research by Pétur Valsson and Maria Lund.