Gertrude Atherton, a famed author during the early 1900s, was always more a novelist than a screenwriter, but, amid her fame as a novelist, she was given major opportunities during the silent era when studios began turning to literary properties to adapt for the screen. A 1932 Los Angeles Times article says that after her husband died in 1887 and was shipped back to Chile in a barrel of rum, the writer left the Atherton estate and, dismissing her dead husband as “the second rate offspring of the Athertons,” moved to San Francisco. Eventually, she relocated to New York with a completed novel that shocked publishers and was derided by critics, but immediately made Atherton famous (B14). 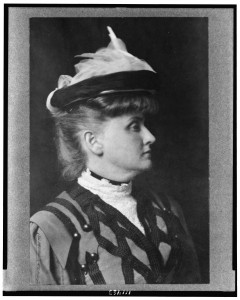 Gertrude Atherton c. 1904. Courtesy of the Library of Congress.

The Los Angeles Times reported that in May 1919, Rex Beach, president of the Authors League, and Samuel Goldwyn announced the formation of the Eminent Authors Pictures Corporation, an organization that owned exclusive picture rights to works by famed authors, one of whom was Gertrude Atherton. Each signed author was given supervision over the motion pictures that were being made from their source material, although they rarely wrote the screenplays for their projects (II10). Atherton was no exception to this rule, although she did work closely with studios during the production of films based on her novels. In a 1921 Los Angeles Times article, she called her life on the studio lot “intensive, unique, exciting, almost unreal” and referred to herself as being “as temperamental as a prima donna” (III16). Although she mainly supervised the adaptations of her work, in November 1920 the Los Angeles Times reported that Atherton was working on her first original screen story titled Noblesse Oblige (II11). In April 1921, the same paper reported that the film opened under the title Don’t Neglect Your Wife (III16). Although it is possible these are different films, they are both referred to as Atherton’s first original screen story, so it is more likely that the title changed over the course of the production.

In 1933, Gertrude Atherton became part of Woman Accused, a large-scale serial project initiated by Paramount Pictures. The sound film written by ten popular authors received a mixed reaction. Critics noted that Atherton’s classic touches were less recognizable than others included in the project. Providing further evidence that Atherton continued working with studios during the sound era, is a 1933 Los Angeles Times article (A7). While original stories were never her focus in production, Atherton blurred the line between novelist and screenwriter during the silent era when she worked in two worlds of writing—inside and outside of the major studios.

Some of Gertrude Atherton's other novels were adapted into films without her involvement in production. For example, The Tower of Ivory (1910) was adapted into the presumably lost film Out of the Storm (1920).