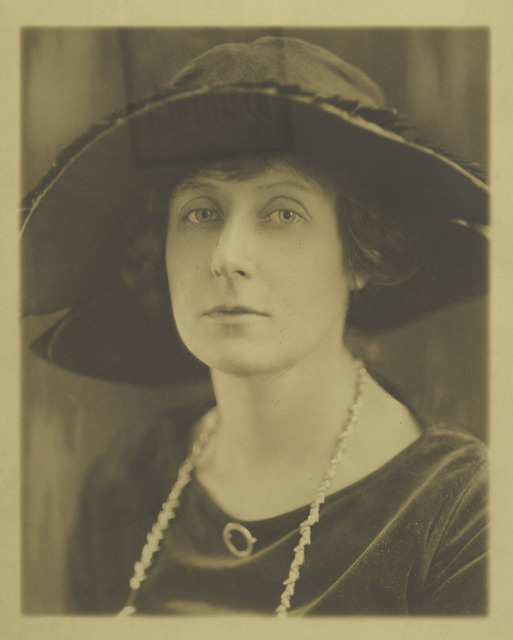 Of her work in theatre and motion pictures, Elizabeth Grimball commented in 1924 to the New York Sun and Globe: “I feel it’s a man’s game, but that won’t prevent me from playing it” (6). Grimball played the game brilliantly, in multiple capacities, but she is best remembered as a theatre and pageant producer as well as theatre educator. She put on at least thirty pageants dramatizing religious or historical themes, most of them in her native South between 1917 and 1922.

Elizabeth B. Grimball. Courtesy of the New York Public Library.

Two productions were “A Pageant of Lower Cape Fear” and “The Lost Colony,” both mounted in North Carolina in 1921. As a theatre producer and arranger of plays, Grimball was instrumental in establishing the Cherry Lane Playhouse, which survives to this day as a viable off-Broadway venue. In addition, she founded the Inter-Theatre Arts School of Acting and Production, incorporated in 1921, which continued, under various other names, at least until the mid-1940s (Gilreath 67). Several celebrated Broadway actresses of their era, such as Helen Gahagan and Betty Starbuck, were Grimball alumnae. Her intention in founding a theatre school was to raise the level of both amateur or community theatre, sometimes called “little theatre,” and professional production and performance, we are told in the American Magazine (67). In addition, she was an actress, a director, and a writer. She wrote several of the pageants she produced, at least two plays, and a book in 1925, coauthored with Rhea Wells, entitled Costuming a Play. Her articles on pageant production and the craft of the theatre, and her activities as a public speaker and commentator on the theatre all helped to publicize her activities in, and views about, the performing arts. Her place in cinema history is minor compared to her place in theatre history, since she made just one film, but The Lost Colony Film has survived and is an interesting artifact of the silent film era.

According to Tom Whiteside, North Carolina filmmaker and archivist, The Lost Colony Film was made in North Carolina in September 1921 as a consequence of the Grimball-directed outdoor pageant “Raleigh, The Shepherd of the Ocean,” which was held at the State Fair in Raleigh in 1920. Grimball says in an article she wrote for Woman’s World that the state of North Carolina had devised a plan to teach the history of the state in the public schools by means of moving pictures, a plan she thought was “ingenious and practical.” And this was the reason, she says, she was “asked to produce and direct the filming of ‘The Lost Colony’” (50). A 1925 article on Grimball in the American Magazine further describes the motion picture as a reenactment of the history of the Lost Colony of settlers on Roanoke Island, founded in 1585 by Sir Walter Raleigh (67). Mabel Evans Jones, superintendent of schools in Dare County, had suggested that this would be a suitable subject for the first of what was supposed to be a series of films on the history of North Carolina, and wrote the script for the film (Powell 115-116).

Elizabeth B. Grimball filming The Lost Colony Film (1921). Courtesy of the University of North Carolina.

A title in the credits of the film states that this film is the first in a series entitled “North Carolina Pictorial History,” but no others in the projected series are known to have been made. Although the early educational motion picture came to be known as The Lost Colony Film, the title as it appears on the film itself is The Earliest English Expedition and Attempted Settlements in the Territory Now the United States 1584–1591. Shot in 35mm by a two-man camera crew hired from the Atlas Educational Film Company of Chicago, Illinois, The Lost Colony Film was five reels in length, with a running time of fifty minutes. The outdoor drama “The Lost Colony” is still presented every summer on Roanoke Island, near the town of Manteo. According to Billy Arthur, the film was the forerunner of the pageant (12).

The Lost Colony Film is a historical costume drama made with amateur actors and a professional three-person crew, according to Whiteside. He describes it as a somewhat confusing tale of exploration, first contact with Native Americans, an attempted colony of soldiers, and their subsequent failure and departure. Another colony followed, this one composed of men, women, and children. This came to be known as “The Lost Colony.” Historical information is derived from the writings of Richard Hakluyt and Thomas Hariot, and visual information from the watercolors painted by John White, the governor of the Lost Colony. Historical scenes that receive the most emphasis include life in the Indian village, the baptism of Manteo, the birth of Virginia Dare, and White’s much-delayed return from England when he discovered Fort Raleigh abandoned, the colony lost. The Daily Advance, the local paper of Elizabeth City, N.C., describes the collective efforts of the locals to help make the film by sewing their own costumes and volunteering their time, and further praises Grimball’s tenacity: “Miss Elizabeth B. Grimball of New York who has directed the enterprise, has worked night and day from the beginning of preparations for the great movie production early in September. Every ounce of her strength, personality and will has gone into the work; and she has kept her temper and her head through ordeals and annoyances, big and small, that would have started Job on the road to profanity” (n.p.).

The Lost Colony Film premiered November 7, 1921, in the Supreme Courtroom in Raleigh, the state capital (Whiteside 1990, 8). Four prints were struck and were distributed by the Bureau of Community Service, a division of the State Department of Education, which found its intended audience in schools, community centers, and civic clubs, including several places in the district where motion pictures had never been screened before. To be able to show the film in places without electricity, a T Ford was fitted with a generator to provide power for a projector (Powell 120). A print of the silent motion picture resurfaced in the mid-1970s, and a 16mm print was made from the 35mm surviving copy by the Roanoke Island Historical Association in Manteo, North Carolina.

1. Elizabeth Grimball as Writer and Director

The print of The Lost Colony Film in the University of North Carolina’s collection is a third generation 16mm print, made in 1986 from an original 35mm print that has since completely deteriorated. The original 35mm film was five reels.