As a founder and director of Pugliese Enterprises, a family-run film exhibition and production company, Caroline Pugliese owned and operated three theatres in Sydney from 1909 until 1922—the Alhambrain Haymarket, the Star Theatre in Bondi, and the Broadway in Leichhardt. According to reports in Kino Cinema International, running the theatres was a hands-on activity for the entire Pugliese family, with Caroline controlling the company finances and helming major business decisions and her children acting as ticket-sellers and projectionists (18). The Puglieses subsisted at the lower, populist end of the market, eking out an existence by showmanship and adding value via music and performance to film screenings. Like other small exhibitors in these early days, Pugliese experienced difficulty accessing a ready supply of motion pictures for screening, which may have prompted her foray into film production in partnership with son Humbert in 1917. 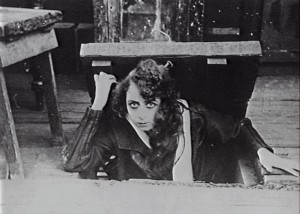 Lottie Lyell in The Church and the Woman (1917). Courtesy of the National Film and Sound Archive of Australia. 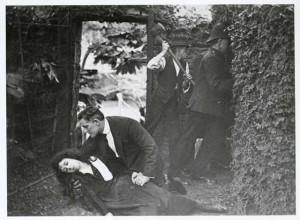 Lottie Lyell and Boyd Irwin in The Church and the Woman (1917). Courtesy of the National Film and Sound Archive of Australia. 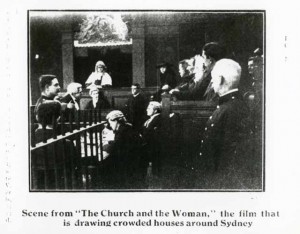 Scene from The Church and the Woman (1917). Courtesy of the National Film and Sound Archive of Australia. 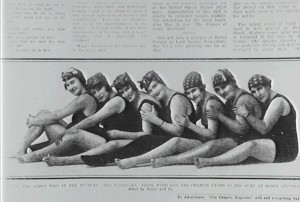 The Waybacks (1918). Courtesy of the National Film and Sound Archive of Australia. 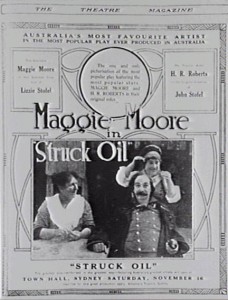 Advertisement in Theatre Magazine for Struck Oil (1919). Courtesy of the National Film and Sound Archive of Australia.

The first Pugliese Enterprises production was Raymond Longford’s The Church and the Woman (1917) starring Lottie Lyell.  Advertising in the Sydney Morning Herald asked the question: “Do you believe in mixed marriages? See the great tragedy of the love of a Protestant man for a Catholic woman” (4). The same paper, reviewing the film a week later, applauded The Church and the Woman as an “intensely dramatic story about the love of a man and a woman of varying faiths” (9). Short seasons followed in Newcastle from October 22 to 25 and in Adelaide from October 24 to 30, 1917,  solidifying its commercial success. The Lone Hand of July 1918 reported that the film had turned over a staggering £16,000 for Pugliese Enterprises (310). Such a strong box office may have been in part attributable to their pioneering marketing initiatives, as the Puglieses had brought their exhibition experience to bear on the distribution of The Church and the Woman with groundbreaking use of a forthcoming attractions trailer. According to the Lone Hand of December 1917, views of the film and announcements were distributed to showmen in order to let “patrons know that The Church and the Woman is coming along and stimulating their interest in the picture” (31). However, The Church and the Woman was plagued by legal challenges. On October 13, 1917, the day before The Church and the Woman opened at the Theatre Royal, rival theatrical entrepreneur Joseph Marks unsuccessfully sought an injunction preventing Humbert Pugliese from using the title, stating that Marks had released The Monk and the Woman just days earlier. As reported by the Sydney Morning Herald that day, Justice Harvey in the equity court “smilingly asked if this was a friendly suit for the purpose of advertising” (9). The court ruling, according to the Daily Telegraph was that all advertising for The Church and the Woman should contain the words “This film must not be confused with the film or play entitled The Monk and the Woman” (2).

A second legal challenge to The Church and the Woman was mounted in 1918 by Edward Finn, an author claiming that the film breached copyright in his novel A Priest’s Secret. Although director Longford had registered copyright in the scenario at the Commonwealth Copyright Office on March 8, 1917, it was an obvious breach. Longford had quoted passages verbatim and in one instance had used a character’s name from the novel. Despite Longford’s blatant breach, action was brought against Humbert Pugliese for “authorising” the breach of copyright, setting the tone for the subsequent strict reading of authorization in Australian copyright law. The trial transcript also indicates a general uncertainty by the court about dealing with cinematographic films and disdain for this “cheap” form of amusement. At one point in the proceedings, C. J. Street refers to The Church and the Woman as a “so-called dramatic work—or photoplay drama as it is uncouthly called” (156). The Puglieses lost the case, and Finn was awarded not only his injunction, but also an account of profits and delivery of the film print and negatives.

Meanwhile, the Puglieses’ second film The Waybacks (1918), directed by Arthur W. Sterry, opened on May 18 at Sydney Town Hall to instant success, even, according to the Lone Hand of July 1918, “to turn the people away” (352).  Based on the novel by Henry Fletcher, The Waybacks was a comedy about a country family at home and visiting the big city. Remnants of this film exist, illustrating its sense of slapstick and larrikinism, or rowdiness, described in the Lone Hand review as “typically Australian with a strong vein of humour” (310). Although commercially successful, The Waybacks did not entirely ease the financial woes of Pugliese Enterprises after the legal expenses incurred by The Church and the Woman.

The final motion picture produced by the Puglieses was Struck Oil (1919). Directed by Franklyn Barrett, Struck Oil featured celebrated actress Maggie Moore in a role she made famous on the international stage. The film opened at Sydney Town Hall on October 20, 1919, and received glowing reviews in Theatre Magazine of November 1919, declaring it “a production that must command the admiration of every picture-goer” (33).  Despite favorable reviews and two weeks’ screening to capacity audiences, Struck Oil failed to gain a foothold outside of Sydney, perhaps as a result of competition from the larger cinemas and distributors such as Australasian Films and Union Theatres. Whatever the  reason, Pugliese Enterprises never made another picture, and by 1922 had divested themselves of all three theatres. Although Humbert Pugliese was credited as producer on all films made by Pugliese Enterprises, there are traces of the overriding guidance and financial control of his mother, Caroline Pugliese, in a role similar to today’s executive producer.  Advertisements and reviews for Pugliese-produced films appearing in Theatre Magazine usually stated “Australian-made for Mrs. C. F. Pugliese” (33); “C. F. Pugliese submits… ” and “… presented by C. F. Pugliese” (37), emphasizing Caroline Pugliese’s status as a pioneering film producer and motion picture theatre owner.

Longford, Raymond. Application for Registration of Copyright in a Dramatic Work. The Church and the Woman. Attorney General Department Copyright Office. No. 5650. 8 March 1917. Copyright Collection. Serial Number: A1336, 5650. National Archives of Australia.