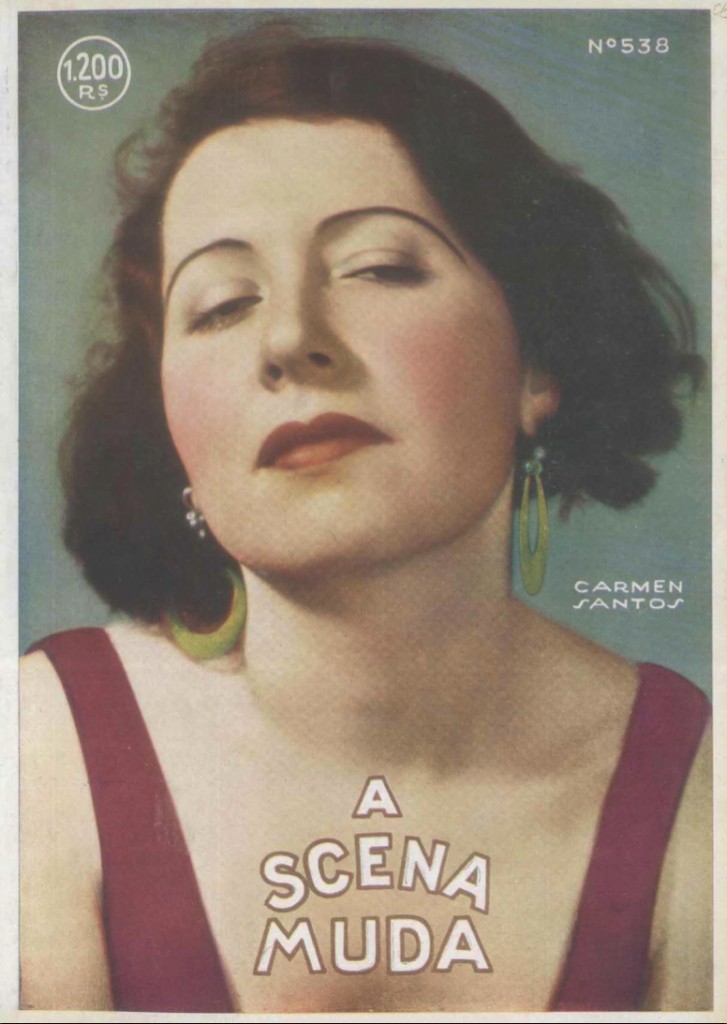 For many poor women in Rio de Janeiro, Brazil, in the early 20th century, the only work available was in factory sweatshops or big city department stores. A young Portuguese immigrant, Maria do Carmo managed to escape this fate when she responded to an advertisement in a magazine and was cast as the lead actress in a film produced and directed by American William Jansen titled Urutau (1919). She would become the motion picture star Carmen Santos. In a fascinating interview in 1929 with the fan magazine Cinearte, Santos admitted that Urutau, the very film in which she starred, was the first film that she had ever seen in the theatre: 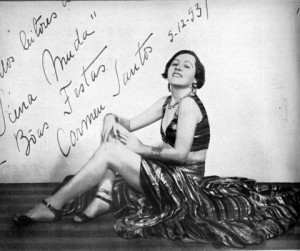 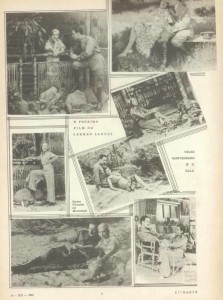 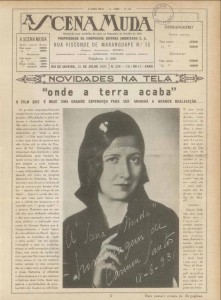 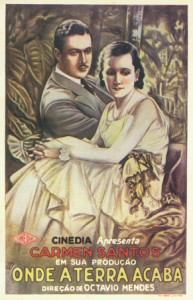 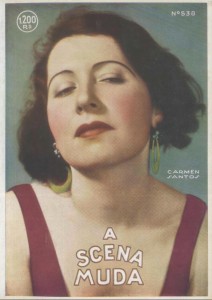 Carmen Santos on the cover of A Scena Muda, 1931. Private Collection. 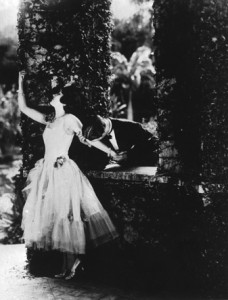 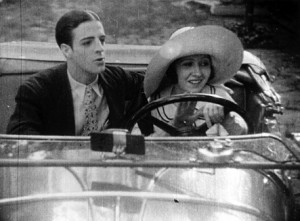 Following Santos’s path, one can trace the trajectory of Brazilian film, headquartered in Rio de Janeiro, from the silent era to the creation of the industrial base of the sound film industry (Noronha 1987).

Despite the praise it received at special showings in Rio de Janeiro and São Paulo, Urutau did not catch the attention of exhibitors. Omega Filmes, the producing company founded by Jansen, folded, and the only print of the film disappeared (Pessoa 31–32). However, around this time, Santos met Antonio Lartigau Seabra, a young businessman and member of a prominent Portuguese textile family. Nine years her senior, he had received a modern European education and was devoted to horses, cars, and planes. “Antonico,” as he was called, became the principal source of encouragement and financial support for the actress’s projects (Pessoa 34–38).

In the 1920s, Santos was often featured in the pages of Brazil’s newspapers and magazines with stories about two controversial projects in which she was involved—motion picture adaptations of Julio Ribeiro’s A Carne and Benjamin Costallat’s Melle Cinema. Both novels were considered exceedingly lascivious by the era’s standards. Although filming did not go forward on either project, Santos remained in the public eye through news items accompanied by provocative photographs that showcased her beauty, a strategy that was unheard of for Brazilian actresses during this era (Pessoa 46–49). After a respite following the birth of her first child with Lartigau Seabra, Santos joined a group from Cataguases, Minas Gerais, agreeing to star in a film directed by Humberto Mauro, Sangue mineiro (1929). The experience inspired her to develop her own project, Lábios sem beijos (1929), with Adhemar Gonzaga. Filming was inexplicably halted although it was eventually completed without her participation under Mauro’s direction (Pessoa 92–103). After the birth of her second child in September 1930, Santos starred in Limite (1931), Mário Peixoto’s first film. They joined forces for another film, Onde a terra acaba, an ambitious project that was to be filmed on Marabaia Island.  The production met with great enthusiasm by the press, which constantly exalted the determination of the producer and director to put forth a national cinema project of unprecedented scale. However, the project was interrupted due to a misunderstanding between the producer and the director. Unwilling to give up, Santos engaged the support of Adhemar Gonzaga’s studio, Cinédia, hired Gabus Mendes to direct, and finished the film, which had already received significant publicity. It premiered in 1933, but was coolly received by the public (Pessoa 133-44).

However, this critical failure did not discourage her, and she turned to her former partner Humberto Mauro at this later stage in her career. Planning for sound film’s new technological requirements, Mauro and Santos founded Brasil Vox Filmes, which would later become Brasil Vita Filmes. While waiting for the studio to be constructed, the company produced a number of silent short films, of which no extant prints are known. The experiments conducted by Santos and Mauro were crucial to the development of Brazilian national sound film production, but a fire in the 1940s caused the loss of the majority of prints of films produced by the studio (Vieira 181).

Santos refused to conform to the role of the seductive muse, taking charge of her professional life by choosing her own projects, hiring her directors, and producing, starring, and directing. The one silent era film that she directed, A Carne (1923) was shot but never released for various reasons (Pessoa 48-49). Unfortunately, a complete evaluation of her contribution to the development of the Brazilian film industry is prejudiced by the irreparable loss of most of her films. Only three films in which Santos appears as an actress survive in complete form—Sangue mineiro (1929), Limite (1931), and Argila (1940). However, according to the Cinemateca Brasileira website, surviving footage from the unfinished Onde a terra acaba (1933), directed by Mário Peixoto, was used for a documentary in 2001.

1. Carmen Santos as Producer and Actress

1. Carmen Santos as Producer and Actress

1. Carmen Santos as Director and Actress

Because Carmen Santos’s career was marked by numerous interrupted film productions, unfinished films constitute a very relevant source of information about her career. Although FIAF does not list Onde a terra acaba, 1931, as extant, the Cinemateca Brasileira lists remaining extant images of the unedited film as used in a contemporary documentary Onde a terra acaba (dir. Sérgio Machado, 2001). After losing financial support that would allow her to finish A Carne as a director, Santos resumed the project solely as the producer in 1924 (Pessoa 2002, 46-56). However, the Cinemateca Brasileira only lists the 1924 film under its filmography.