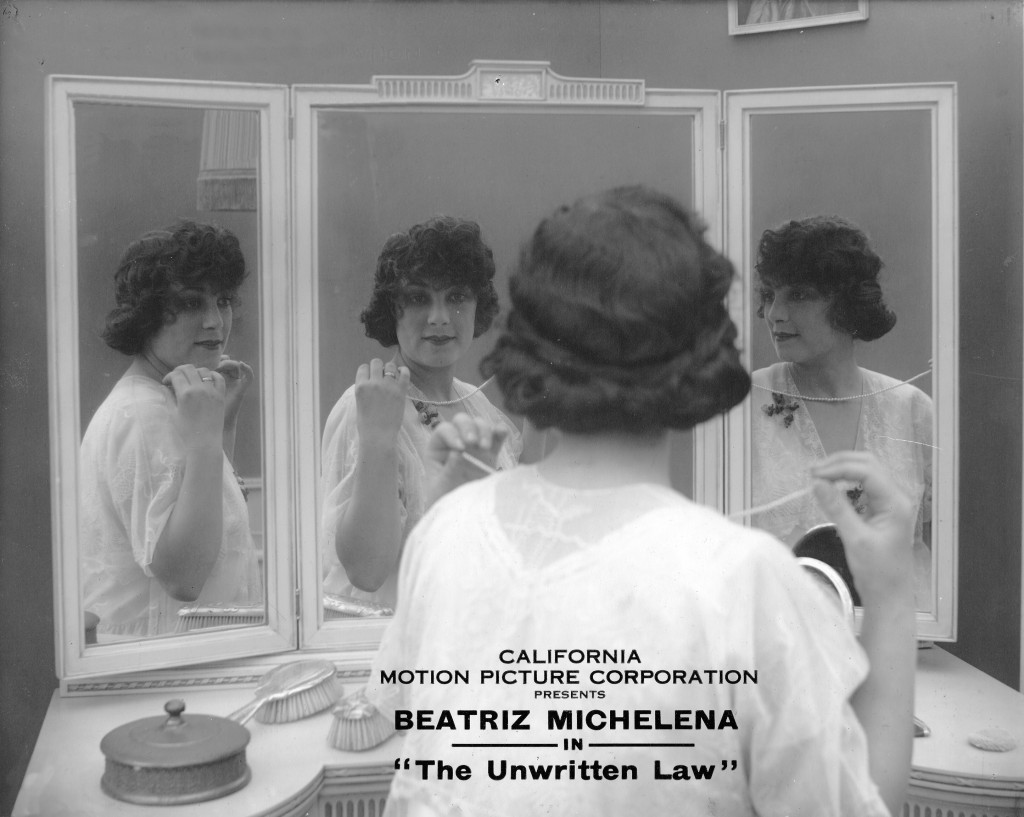 One of the first Hispanic women to attain stardom in the silent cinema, Beatriz Michelena appeared in at least a dozen films between 1914 and 1920 and headed her own production company, Beatriz Michelena Features, from 1917 until 1920. She was the daughter of Fernando Michelena, a well-known operatic tenor and the sister of Vera Michelena, also a screen actress. Like her father, Beatriz first found professional success as a singer. She turned to film in 1914, achieving immediate stardom with the release of her first film, Salomy Jane (1914), and was pictured on the front cover of the December 1914 issue of the New York Dramatic Mirror. 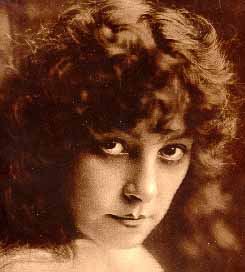 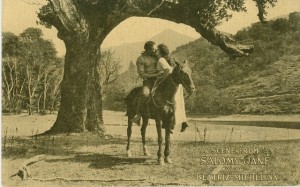 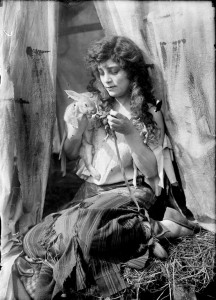 Beatriz Michelena as Mignon in Mignon (1914). Courtesy of the Marin County Free Library. 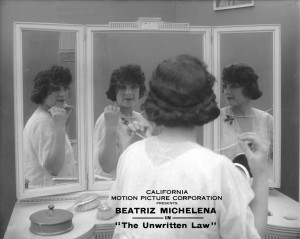 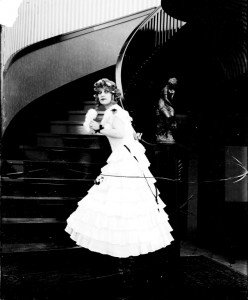 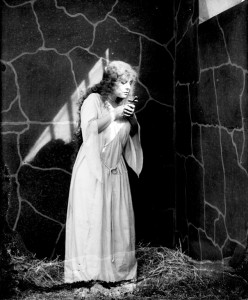 Beatriz Michelena as Marguerite in Faust (1917). Courtesy of the Marin County Free Library. 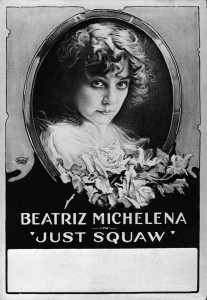 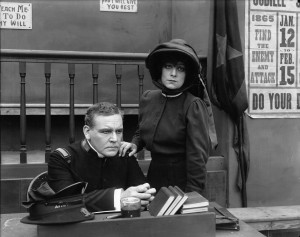 Reviews of Michelena’s acting emphasized her natural beauty, acting ability, and versatility. She also reportedly performed her own stunts in several Westerns, most notably those produced by her own company. A review of The Flame of Hellgate (1920) in the Moving Picture World remarks that “Miss Michelena’s riding and easy manipulation of the lariat compels admiration” (2007). The actress also drew on her operatic background for her performances in Mignon (1915), The Woman Who Dared (1916), and a highly touted but ill-fated production of Faust (1917).

Between 1914 and 1917 Michelena starred in a series of successful films for the California Motion Picture Corporation. Although some sources identify Michelena and producer-director George E. Middleton, referred to in some but not all sources as her husband, as the owners of that company, their very public and apparently acrimonious departure from the company in 1917 suggests otherwise. The rift occurred when both Michelena and Middleton left the company over a salary and contract dispute during the making of Faust (1917). Evidence suggests the degree to which Michelena was involved at the production level in her last few projects with the California Motion Picture Corporation, utilizing her family as well as her own professional background as a singer. Her father, Fernando Michelena, directed the opera scenes in the extant title The Woman Who Dared (1916), and may have worked as well on Faust (1917). An article appearing in the New York Dramatic Mirror before the completion of Faust (1917) notes the prima donna singer’s commitment from the beginning of her career to producing the “greatest of the operas” as motion pictures (26).

Something of the rift between Michelena and the California Motion Picture Corporation is also told in the fate of the Faust footage, which appears to have been incorporated as a dream sequence into a later California Motion Picture Corporation production, The Price Woman Pays (1919). Promotion for the film in which Michelena does not exactly appear reveals both the box office power of the name Beatriz Michelena and what might be interpreted as the company’s lingering rancor towards its former leading lady. Strangely, the actress’s name is misspelled in the promotional material appearing in the Exhibitor’s Trade Review as both “Beatrize” and “Beatrice,” aberrations from the consistent spelling “Beatriz” found in sources from the period. Despite the fact that the actress was no longer involved as producer, she was still used as the draw, which is seen in the promotional material recommending that theatres emphasize Michelena in the role of Marguerite. Promotional posters for the film feature “the beautiful Marguerite in all her womanly charms” and note that, along with costar Lois Wilson, she was “too well-known to need any introduction to the average motion picture fan” (1575–76). We begin to see the opportunism of the California Motion Picture Company when we read the Wid’s Daily review of the film, which describes Michelena’s role in the film as “unimportant” and “unnecessary” and even states that her star-billing is “misleading.” The review finally dismisses The Price Woman Pays (1919) as nothing more than an “ordinary program picture” aimed at a “cheaper picture clientele” (23). 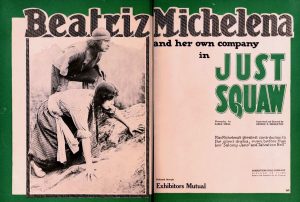 In 1917 Michelena formed her own production company, Beatriz Michelena Features, located in San Rafael, California. She was joined by George Middleton and several actors with whom she had worked at California Motion Picture Corporation, including William Pike, Albert Morrison, and Clarence Arper. The venture, although short-lived, was successful in its first years. In May 1919, the Moving Picture World reported that the distribution company Robertson-Cole had purchased a series of three feature-length productions that Beatriz Michelena and “her own company” had completed in these few years, listing Just Squaw (1919), The Deadline or The Dead Line, released as The Flame of Hellgate (1920), and The Spitfire, which appears to be an earlier title for The Heart of Juanita, released in 1919 (700). Whether this last title was produced by Beatriz Michelena Features or the California Motion Picture Corporation is not entirely clear. The American Film Institute Catalog lists the latter as the production company, noting that the film was produced in 1916 while Michelena was still with the company, and gives the original title of The Heart of Juanita as The Passion Flower. In her own account of the split with the California Motion Picture Corporation, Michelena mentions that at the time of her dispute over Faust (1917), she had still not been compensated for her work in The Passion Flower, so it is possible that she obtained the rights to the film and was thus able to include it in the package purchased by Robertson-Cole. The entry in the American Film Institute Catalog lists The Specific as the title under which Robertson-Cole purchased the The Heart of Juanita, but the similarity between this and the title The Spitfire announced in Moving Picture World suggests that one or the other is a misprint. 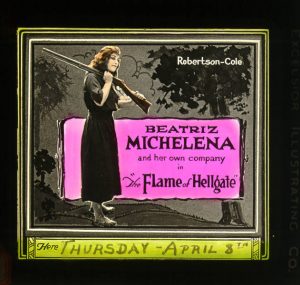 All three of these last Michelena films are Westerns that rely on action and emphasize the beauty of the northern California landscape. The variations on the role of the Western heroine found in Michelena’s characters are unusual for their time, allowing for an unprecedented fluidity in both ethnic and gender identity. In the extant film Just Squaw (1919), she plays a white woman raised to believe that she is Native American; in The Heart of Juanita (1919) she plays a Spanish dance hall girl banished to Mexico for killing her lover in a fit of jealousy; and in The Flame of Hellgate (1920) she plays a hard-riding, gun-toting daughter, who takes on the guise of a male bandit in order to track down her father’s killer. Little is known about Beatriz Michelena after 1920, and one wonders what this ambitious actress-producer did in the twenty years after the end of her company. She died in 1942 at the age of 52.

1. Beatriz Michelena as Actress and Producer

1. Beatriz Michelena as Producer and Actress

FIAF does not give any credit information for The Woman Who Dared. The Flame of Hellgate (1920) is also known as The Deadline or The Dead Line.

August 2020: Recent research by film scholar Laura Isabel Serna calls into question Beatriz Michelena’s status as the first Latina film actress. While many sources state that Fernando Michelena, who was born in Venezuela and came to New York in 1887, was her biological father, a March 12, 1921, an obituary for him in The Daily Times (a Bay Area social and cultural publication) notes that he was a “devoted stepfather” to Beatriz and her sister Vera (“Town Talk” 9). To date, Serna has not yet found a birth record for Beatriz or a marriage record for her mother (Frances Lenord) and Fernando Michelena. Lenord also does not appear in the census in New York or San Francisco, which further complicates this ongoing investigation into Beatriz’s status as the first Latina film actress.