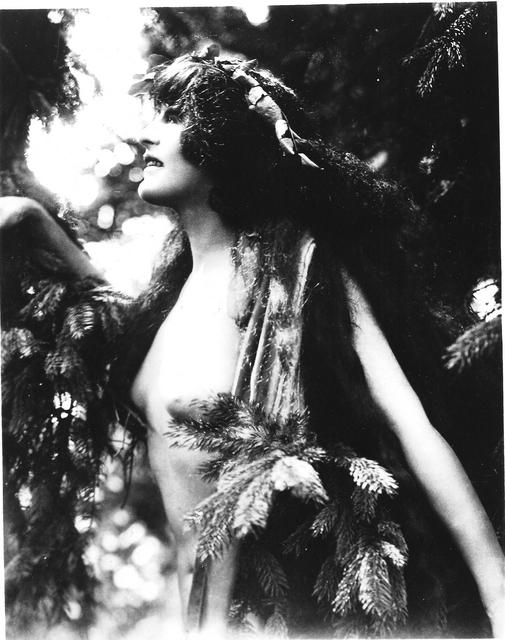 Annette Kellerman’s entrée into silent film began in the middle of an acrimonious battle to control the terms of her vaudeville career. Australian-born, she had established herself as a powerful draw on the American vaudeville circuit by promoting her “Perfect Woman” physique and presenting spectacular high diving and underwater exhibitions. Caught in a firestorm between theatre magnates B. F. Keith and William Morris after Morris offered Kellerman $1,500 per week, she astutely used her commercial popularity to get an agreement to appear in several silent kinetoscope shorts. She was ordered by court decree to fulfill the rest of her contract with Keith before beginning with Morris (Gibson and Firth 2005, 79–82).

Annette Kellerman in swimsuit. Courtesy of the Library of Congress.

Kellerman’s “bodiliness” and sexuality were key aspects of her vaudeville performances. Thus, by the launch of her motion picture career, she had already developed a compelling trademark that combined an eroticism emphasized by form-fitting costumes with a daredevil prowess to which was added advocacy of women’s access to physical culture. Kellerman was arrested and charged with indecent exposure on Boston’s Revere Beach for wearing a “maillot pantaloon,” a unitard with no legs, and was critical of corsets, which she described as “fiendish things injurious both to body and health” in her 1918 book Physical Beauty: How to Keep It. Between 1909 and 1911, Kellerman appeared in both aquatic and nonaquatic silent roles for the Vitagraph Company, with her athleticism most prominently displayed in Miss Annette Kellerman (1909). She starred as well in The Bride of Lammermoor: A Tragedy of Bonnie Scotland (1909), Jepthah’s Daughter: A Biblical Tragedy (1909), The Gift of Youth (1909), and Entombed Alive (1909). With the exception of Jepthah’s Daughter, these early films are believed to no longer exist, making it difficult to trace Kellerman’s nascent film star persona. However, the highly marketable appeal she had developed for mass audiences likely increased the control she would have over her image production (Cullen, Hackman, and McNeilly 2007, 619-20).

Kellerman finally left vaudeville when Edward Albee of what became the Keith-Albee-Orpheum Corporation threatened to cut her salary in half. Striking out on her own, she convinced Captain Leslie T. Peacock to script her idea for the underwater fantasy film Neptune’s Daughter (1914). Carl Laemmle of Universal Film Producing Company took on the project, and Herbert Brenon directed. Kellerman’s biographers Emily Gibson and Barbara Firth sketch the outlines of her uncredited “co-directorial” role in this production, describing Kellerman as contributor in the development of story lines, stunts, locations, and camerawork. In the degree of control she exercised, they compare her favorably with the most powerful stars of the day—Mary Pickford, Charlie Chaplin, and Douglas Fairbanks. In support of this view of Kellerman, her biographers quote her as having said of director Brenon that he constantly turned to her, asking, “What do you think we should do here?” (118).

Kellerman’s sheer physicality and bravery dominated her films and propelled the scene action. For example, in one scene from Neptune’s Daughter, she leaps from a cliff in combat with the villain then overcomes him to rescue the male romantic lead. Her biographers tell us that the dangerous physical stunts in the film left both Kellerman and Brenon severely injured. Kellerman was knocked unconscious in a cliff dive, and both actress and director were badly cut when the underwater tank in which they were performing burst (119–21). In Kellerman’s next film, A Daughter of the Gods (1916), reportedly the first feature film to cost over a million dollars, she again became an uncredited cowriter of the script in addition to costume designing, casting, and training hundreds of performers (135–6). For the film, Kellerman and Brenon scripted a death-defying waterfall dive. Gibson and Firth tell us that when William Fox studio executives eliminated the scene because it looked too risky, Kellerman complained to them: “That’s the way. Somebody’s always trying to take the joy out of life” (136). Kellerman also refused a double for a scene that required her to jump into a pool of live crocodiles, and she became notorious for delivering the first nude appearance by a high-profile star in a large-scale production (139).Yet Kellerman’s film publicity couched her sexual charge in terms of formal artistry, comparing her physique to that of the goddess Venus, a ruse to keep from offending middle class tastes. But Kellerman’s fearlessness and sexuality went beyond pure titillation. According to one Boston Post journalist: “After seeing her, one may feel like defying any ten-foot man in the audience to declare that the sex of which she is an ideal example hasn’t the courage to fight or the ability to vote or do anything else they choose to do” (149).

Queen of the Sea (1918), What Women Love (1920), and Venus of the South Seas (1924) were Kellerman’s last three major motion pictures. The first was a less successful reworking of many of the themes and stunts found in the earlier mermaid films. The second was a comedy that initially paired Kellerman with Lois Weber, the director who had launched her own production company, but who was ultimately replaced on the film. Venus of the South Seas was a comparatively low-budget production with a New Zealand production company directed by Kellerman’s manager-husband James Sullivan and thought to be the only complete Kellerman film extant. Though far less grandiose in scale, Venus reprises her signature role.

Beyond the biographical account provided by Gibson and Firth, there have been few attempts to identify Kellerman’s agency in the film projects she built. In all of her films, her characters retain names that are some form of “Annette,” attesting to the carryover of Kellerman’s prefilm star persona. During the making of the fictionalized account of her life in the Esther Williams star vehicle Million Dollar Mermaid (1952), Kellerman technically advised Busby Berkley on the choreography of water scenes. Kellerman was so active in the mode and manner of her representation that we might best see her various theatrical producers and film directors as her collaborators. Further consideration of her creative input is now more possible because partial prints of key titles, among them Neptune’s Daughter and Siren of the Sea, have been recently uncovered through amateur research and are held in archives in Australia, the United Kingdom, Denmark, and Russia.

3. Annette Kellerman as Herself

Venus of the South Seas. DVD (Grapevine Video US 2004)

The Annette Kellerman filmography is incomplete as she was not credited on-screen for the work behind the scenes of her films, particularly in terms of stunt design and co-collaboration in scripting and direction. For example, she codirected scenes of Neptune’s Daughter. This filmography is based on references to her work by her biographers, the research work of Mary Ann Cade, and cross-referencing of existing filmographies. The existence of The Art of Diving (1920) needs to be confirmed.

Stieglitz, Olaf. “ Swimming the Crawl to Educate the Modern Body: Visual Material and the Expanding Market for Participatory Sports in the USA, 1890-1930s.” In Body, Capital, and Screens: Visual Media and the Healthy Self in the 20th Century. Amsterdam: Amsterdam University Press, 2020. 159-180. https://www.jstor.org/stable/j.ctv12sdvgj.9.