Ángela Ramos de Rotalde was one of Peru’s first journalists, and a progressive who sympathized with the early Peruvian communism of José Carlos Mariátegui. She maintained a strong feminist position that she defended with acute intelligence and a sense of humor. 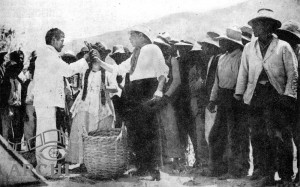 She also participated in Peruvian cinema. In 1927, Italian filmmaker Pedro Sambarino asked Ramos to write the script for a film he planned to direct. Sambarino came from La Paz, where he had directed Corazón aymara/Aymaran Heart (1925), the first Bolivian feature film. In that film there are many elements indicative of the director’s interests, such as the mixture of fiction and documentary and a love story that takes place in a local indigenous area. While Ramos had never before written for film, she had worked in publicity, had published some short stories, and had flirted with the idea of motion picture work. 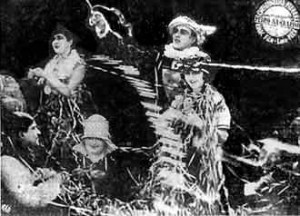 In El carnaval del amor/The Carnival of Love (1930), the country-city dichotomy is in full force. Here, the country represents innocence and women, and the city represents corruption, falseness, and, of course, men. But Ramos’s script contains a progressive variation in which the main character is not a naive girl but a professor, a symbol of progress, who comes from the city to work with a landowner who wants to bring welfare and education to his workers. In contrast to Chilean director Alberto Santana’s films, in which romance and the loss of virtue were depicted in a melodramatic way, El carnaval del amor was described as picturesque, humorous, and naturalistic. The film’s publicity emphasized the social aspect over the romance, and the most melodramatic scene was effectively a dream sequence.

Production took more than two years, but the success of the Stefanía Socha film Los abismos de la vida/Life’s Abysses (1929) made it possible for El carnaval del amor to receive its first screening in February 1930. Even the newspapers that had not publicized the film gave it good reviews. One January 1930 review saw the film as anticipating a national film industry:

El carnaval del amor is… the best national movie edited to this day, in spite of the pretentious La Perricholi, churrigueresque film. It exalts our country and city values. It depicts a beautiful Lima, true, without exaggerations. A fertile country, with strong and hard-working men. It exalts our best values, our richness, our landscapes, our good country people. Its plot is pleasant and well made. If the film doesn’t have many close ups it’s because we don’t have complete “studios” yet, but we’ll get there someday. We think it is important to recommend films that exalt healthy Peruvian customs, music, poetry, as well as many noble values of our nationality. This is the way national cinematography should be made. Peruvian cinema that exalts our beauty and moral, spiritual, economic, artistic and material richness.

Ramos was able to find the perfect ironic tone for Lima’s middle class audience by combining her writing style with Sambarino’s documentary-style visuals. However, because there was no Peruvian film industry, this was Ramos’s only film as with most Peruvian film pioneers.