Agnes Adele Wangenheim was born in Sydney in 1872. At the age of eighteen, she married Barney Kurtz, but divorced him not long after. She was Agnes Kurtz on the first of October 1898, when she married Sydney-born stage actor John Francis Henry Gavin, then twenty-three years old. They were a striking pair: John, tall and dark, bluff and hearty, with a broad smile; Agnes smaller, attractive, with a clear, olive complexion and bright, dark eyes. Together they worked as actors in the Bland Holt stage company and in vaudeville for many years before entering motion pictures together in H.A. Forsyth’s 1910 production of Thunderbolt in which John played the title character and Agnes may have played a gypsy. The Gavins were not unusual for their time, working as a partnership, but with the husband in the more public and visible role. On Forsyth’s next film, Moonlite (1910), John moved into direction while Agnes played the aboriginal girl Bunda in blackface. John then directed several films in 1911 for Crick and Finlay (Ben Hall and His Gang; Frank Gardiner, King of the Road; The Assigned Servant; Keane of Kalgoorlie) and followed Stanley Crick into the Australian Photo-Play Company, directing The Mark of the Lash (1911). He then branched out on his own, forming John F. Gavin Productions, which produced two further films in 1911: The Drover’s Sweetheart and Assigned to his Wife. 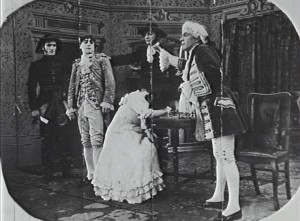 The Assigned Servant (1911). Courtesy of the National Film and Sound Archive of Australia.

Agnes, meanwhile, had continued to take small roles in John’s films, but was also credited as scenario writer for all the films from Ben Hall and His Gang (1911) onwards. Most of these told stories about the outback and most were set in earlier times. Bushranging was a favorite theme—not just featuring the well-known historical and literary characters such as Thunderbolt, Moonlite, Ben Hall, and Frank Gardiner, but also with their original subplots. The Assigned Servant (1911) is the story of a convict who marries the daughter of the man to whom he has been assigned and, as a consequence, is sent back to prison from which he escapes to take up life as a bushranger. Convicts featured again in The Mark of the Lash and Assigned to his Wife. In fact, in this period Agnes wrote only one scenario of contemporary city life and that was not an original story. Keane of Kalgoorlie (1911) was taken from the play by E. W. O’Sullivan, based on the novel by Arthur Wright, and concerned horse racing and the gambling that surrounded it. The Australian film industry in which the Gavins worked was dependent largely on nonfiction; that is, it recorded contemporary events. However, fiction was also popular and Australia moved into multireel fiction earlier than other countries. When they formed John F. Gavin Productions, John and Agnes were riding this wave: Assigned to his Wife, which opened in Sydney in October 1911, was 4,000 feet long. The Drover’s Sweetheart (1911), somewhat shorter at around 3,000 feet, may or may not have opened as there is no record that it was ever screened publicly. 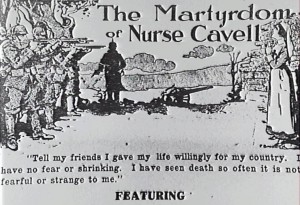 Ad for The Martyrdom of Nurse Cavell (1916). National Film and Sound Archive of Australia.

After this burst of creativity, resulting in nine films in less than two years, most of them multireel, the Gavins’ names disappear from the  record. Presumably they returned to the stage, except for one short venture back into film in 1913, when John appeared as an actor in A Melbourne Mystery. However, they had not given up completely on the motion picture business, and in 1916 came their most successful production of all—The Martyrdom of Nurse Cavell, produced for Australian Famous Feature Company. The length of this film was no longer noteworthy, as most productions were now multireel. However, this was the first film to tell the story of the execution of English nurse Edith Cavell by the German army in October 1915—a story that had captured the imagination of audiences worldwide and certainly in Australia. John claimed that Agnes wrote the scenario overnight and that the entire production was completed in just three weeks. It was directed jointly by John Gavin and C. Post Mason and was well received, both in Australia and, later, in Britain and the United States. Gavin then made two short films: Charlie at the Sydney Show (1916), with Chaplin impersonator Ern Vockler, and An Interrupted Divorce (1916), for which Agnes again wrote the scenario. 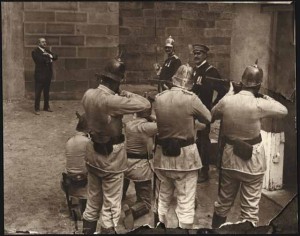 The Martyrdom of Nurse Cavell (1916). National Film and Sound Archive of Australia. 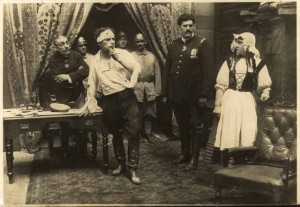 The Murder of Captain Fryatt (1917). National Film and Sound Archive of Australia.

There is copyright registration evidence that around this time Agnes also wrote other film scripts that were never produced. She certainly wrote John’s next feature, The Murder of Captain Fryatt (1917), again for Australian Famous Feature Company. It was expected that this story of another German atrocity, which had received nearly as much coverage in Australian media as the death of Edith Cavell, would be a financial success. However, the Australian public seemed to be tiring of the war, had defeated conscription in two referenda, and was not nearly so concerned about the fate of the commander of a merchant ship as they had been about that of a young nurse. Agnes returned to convict times and familiar themes for her next scenario—His Convict Bride (1918), again for Australian Famous Feature Company. 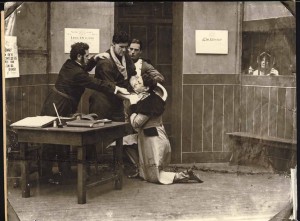 His Convict Bride (1918). National Film and Sound Archive of Australia.

Later that year, John and Agnes left for Hollywood, where John returned to acting, mainly in Westerns and comedies, but there is no record of what Agnes did. They returned briefly to Australia in 1922 and permanently in 1925, John full of great plans to revive Australian film production using his knowledge of Hollywood methods. He joined his old boss, Herbert Finlay, in the Australian Artists Company, to make Trooper O’Brien (1928). Finlay was producer; John Gavin directed; and Agnes Gavin once again wrote the scenario—returning to familiar territory with a story of a rural policeman that incorporated segments from earlier bushranging films. The film was ignored by Australia’s major distributors although it enjoyed a modest success when they did manage to get venues to screen it. This seems to have been Agnes’s last film, though John acted in Norman Dawn’s The Adorable Outcast (1928). The Gavins followed trends rather than led them, but they did so with persistence and occasionally outstanding success. Although their careers could never be described as brilliant, they made a significant contribution to early Australian film and without a doubt Agnes was the first Australian woman to make a career in scenario writing.

Both the prints of Thunderbolt and Trooper O’Brien at the National Film and Sound Archive in Canberra are incomplete.