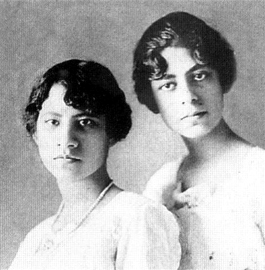 The sisters Adriana and Dolores Ehlers, who worked together all their lives, were pioneers in every area of filmmaking. As Dolores described in a 1977 interview, they shot documentaries, worked in film processing laboratories, sold projection apparatuses, and participated in the politics surrounding cinema during the difficult phase of the Mexican Revolution known as carrancismo (Ehlers n.p.). When they were children, their father died and their mother supported them by working as a midwife. They lived with another family in the port city of Veracruz and politically supported the anti-Porfirian aims of the Revolution’s generals, Madero and Carranza, aligning themselves with other women leaders of the time (Ehlers n.p.).

Forced to leave school because of economic problems, Adriana began working in a photography studio, where she became skilled in all aspects of this trade. The sisters decided to open their own portrait studio in their patio house and soon acquired a considerable number of clients, who were impressed with the artistic style of their portraits. When President Venustiano Carranza visited Veracruz, the sisters were called upon to take his photograph. Carranza expressed his gratitude by awarding them a grant to study photography in Boston, Massachusetts. According to the Ellis Island website, they arrived in the United States on the Monterey on September 4, 1916. Dolores was nineteen years old and Adriana was twenty-one. Once there, they worked in the Champlain Studios to learn more about commercial photography and attended an art school for teachers at night. When the grant period ran out, the Ehlers were given an extension to study motion picture cinematography, and they became part of the Army Medical Museum in Washington DC, where the United States government had allocated funds for producing films to educate American soldiers serving in World War I about health issues. Here the sisters learned, under strict military discipline, to shoot, develop, process, and title films. Finally, still supported by the Mexican government, they completed their motion picture production education at Universal Pictures Company in Jacksonville, New Jersey (Ehlers n.p.).

Upon their return to Mexico in 1919, the Ehlers sisters obtained a concession to sell Nicholas Power Company cameras and projectors in Mexico City. They again set up their business in the first floor of their house, where they sold the American-made equipment under the name “Casa Ehlers” and instructed camera operators and projectionists on how to use them. They were soon appointed to the Mexican Ministry of Government—Adriana as Chief of the Censorship Department and Dolores as Chief of the Department of Cinematography—which included the laboratory for developing the documentary films both women shot. The Censorship Department was created with the intention of suppressing the demeaning images of Mexico and Mexicans that were common currency in US films, as well as those scenes considered offensive to public morals. The sisters produced a number of films that celebrated Mexico in order to counter these negative stereotypes, filming parades and protests, the caves of Cacahuamilpa, the Teotihuacán ruins, and the National Museum of Archeology, History, and Ethnography. They spent months touring the country and shooting a feature-length documentary about water treatment, carrying Bell and Howell and Universal cameras that weighed almost eighty pounds each. They processed their documentaries in the film laboratory at the Mexican Department of Cinematography, and these films were exhibited in schools, factories, governmental departments, and charity institutions (Ehlers n.p.).

As women working in an exclusively male environment, the Ehlers sisters faced criticism and resistance, in part because they dressed in pants and were self-sufficient. These were also difficult years politically. After the murder of President Venustiano Carranza, their great protector, and with the ascendancy of Álvaro Obregón to the presidency of the Republic in 1920, Adriana and Dolores were dismissed from their positions. However, for a while Adriana was able to shoot and process motion pictures in a small homemade laboratory. One of the films they made for the International Petroleum Company was exhibited in 1922 in the United States. In addition, between 1922 and 1929, they made weekly newsreels called Revistas Ehlers/Ehlers Reviews, moving images of events of the time such as catastrophes, parades, and protests, which they sold directly to exhibitors. The sisters also continued to market projectors and parts through Casa Ehlers, supplying the fledgling Mexican educational and industrial film industry (Ehlers n.p.). The materials the Ehlers sisters filmed moved from the Ministry of Government to the National Archives and from there to the Cineteca Nacional, where they undoubtedly burned in the 1982 fire.

With additional research by Greta Nordio.

1. Adriana and Dolores Ehlers as Producers and Directors

2. Adriana and Dolores Ehlers as Directors