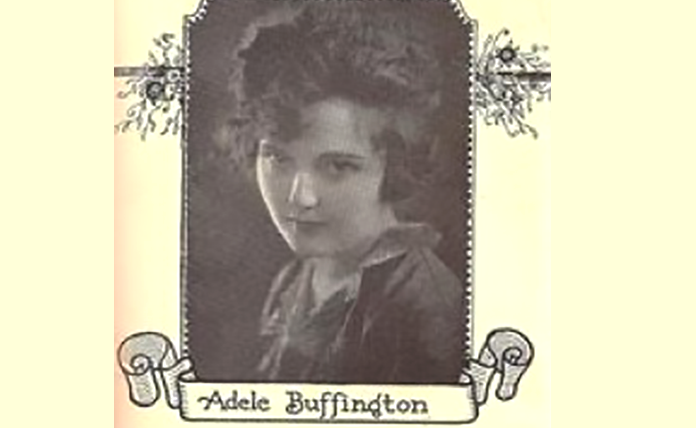 Building on her early success in silent cinema, Adele S. Buffington enjoyed a long and successful career as a Hollywood screenwriter. Unfortunately, very little has been written about Buffington’s career, especially as it relates to her roots in silent cinema. Born Adele Burgdorfer in St. Louis, she began working as a movie theatre ticket cashier as a teenager. During her three years as a cashier, she was able to  study numerous films on screen before her first attempts at writing a scenario of her own (McCreadie 58). She also took notice of the movie patrons as they flooded into the theatre to see their favorite characters on the screen. She is quoted in the Ft. Wayne, Indiana, newspaper as saying: “I had always wanted to write, but never had the nerve to try before. But there came the hour when I simply had to do it—and I did. Every night when my work in the cage was done, I went to the library and read, getting details and atmosphere for the scenes I had in mind—for the background against which I wanted those dear people I knew to move and make drama. Then when everyone else was asleep, I would write and write” (qtd. in McCreadie 58).

Buffington’s career officially began at the young age of nineteen when she sold her first script, La Petite (1919), to an independent studio for three hundred dollars and was subsequently hired to work for Thomas H. Ince (Lowe 98). After writing L’Apache (1919) for Ince, which appears to be her first produced script, the Washington Post reported Buffington as being one of Ince’s “recent scenario discoveries,” continuing, “Mr. Ince has great confidence in Miss Buffington’s ability” (A4).

Adele Buffington in The Photoplaywright’s League of America, 1921-1922. Private Collection.

Although she worked steadily during the silent years, Buffington received very little coverage in the press. Even writing credits associated with her films were sparse in newsprint at the time, offering a clue as to why Buffington had such a low public profile as she began her career and slowly gained a foothold in the industry. In 1924, the Los Angeles Times briefly featured Buffington in an article entitled “Beauty and Brains Go Together Here,” which claims that her work in the industry helped disprove the “beautiful but dumb theory.” The article thus works this cliché: “Miss Buffington, who is 24 years of age, says that she’s sorry she doesn’t look intellectual,” and quotes her as saying, “I suppose I’ll have to plaster my hair down with grease, wear huge horn-rimmed spectacles and talk the classic and evolution of drama and motion pictures, and tell them I am 44 instead of 24” (C33).

In the year 1924, Buffington produced many scripts and would become known for her productivity, especially during her years writing Westerns, although many would not have been aware of this since she was also known to use the pseudonyms Jesse Bowers and Colt Remington (Colton X5). She championed the creation of original screen stories at the moment when studios were open to re-evaluating the practice of buying rights for published source material. “The present demand for original stories rather than published fiction or successful stage plays is largely the result of the wise attempts producers are making to curb over-lavish expenditures,” Buffington explained. “Every large studio has numerous books on its shelves to which the film rights were purchased from time to time, only to determine later that the stories in question did not possess plots suitable for cinema presentation. Other novels and plays have been brought to the screen only after many necessary changes were made, due to the fact that the original stories owed their charm to brilliant dialogue rather than the interesting action essential to silent drama” (Whitaker C36).

Buffington worked for numerous film companies, sometimes several at a time, including Fox Film Corporation, FBO (which became RKO Radio Pictures), and Gotham Film Company. After transitioning out of the silent era and into sound, her output of Westerns increased, totaling forty-eight. She wrote the first script for the “Rough Rider” series, the script for Arizona Bound (1941), as well as scenarios for well-known Western genre actors such as Tom Mix, Buck Jones, and Tim McCoy (Lowe 98). Her last produced script was for the Western film Bullwhip (1958).

Buffington was also a founding member of the Screen Writers Guild. After being active in the All-Guild Committee to Suppress Communism during the tumultuous McCarthy era, she infamously stirred up controversy in the 1951 guild elections after circulating letters attacking guild president Karl Tunberg for allegedly being a Communist sympathizer. In Buffington’s long career she accumulated  more than one hundred and fifty writing credits, testimony to her achievement and longevity as a woman scenarist in the early motion picture industry.

Blood Will Tell is listed in some sources as being released in 1926 and in other sources as 1927. It came out at the end of 1926 and consequently went into wide release in 1927. FIAF lists Blood Will Tell as being directed by Ollie Sellers, a fact that contradicts every other source. Very little information exists for Love on the Rio Grande. We have consulted Larry Langman’s A Guide to Silent Westerns to confirm information on Buffington’s western films. L’Apache is listed as L’xx Apache in AFI; according to IMdB, an alternate US title is Apache. AFI lists Adele Buffington along with Mona Marron as screenwriters of Love on the Rio Grande, but FIAF only lists a Mona Martin as screenwriter. FIAF does not list Buffington as a writer of films for which she is credited on AFI as a scenario, story, or scriptwriter: The Countess and the Cowboy, Eager Lips, Bare Knees, Coney Island and The River Woman. Times Square is dated as 1928 by AFI and 1929 by FIAF. Furthermore, AFI lists Buffington as the screenplay writer and Norman Houston as the story writer, but FIAF only lists Norman Houston as the writer.