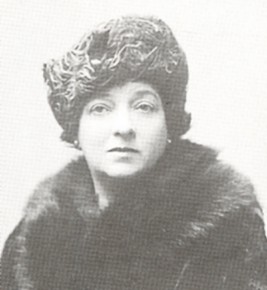 Ada Aline Urban is not mentioned in any film histories, but as co-owner and chief financier of the Natural Color Kinematograph Company, she was the leading female figure in British film of her day. She was the seventh of the eight children born to Anton Leon Gorecki, of Polish ancestry, and Margaret Brown. Her father worked as professor of languages at the University of Glasgow. Little is known of her upbringing, but she first married Alexander James Jones, a traveling salesman with the cinematograph and optical firm of Butcher’s & Sons. The couple had two children, Maxwell Jardine and Anna Marguerite, known as Margot. It became an unhappy marriage, and around 1907 she met American film producer resident in Britain, Charles Urban. Each divorced their previous partner, and they were married in February 1910.

In 1908, Charles Urban had given the first public presentation of Kinemacolor, the world’s first successful natural color motion picture system. Commercial production and exhibition began in 1909 after Urban acquired the patent rights from inventor George Albert Smith. The money for the purchase came from Ada Aline Jones, at the considerable sum of £5,000. She was made a director of the film company formed to exploit the new process, the Natural Color Kinematograph Company, becoming  the most powerful woman in British film to that date. Kinemacolor became a considerable financial as well as social success. Its showcase screenings at the Scala Theatre around 1911 to 1915 became an essential attraction for the discriminating Londoner who would rather experience film in a theatre than in a low class cinema. In particular their extensive color record of the Coronation at the Delhi Durbar, With Our King and Queen through India (1912), encapsulated an Imperial experience and drew respectful audiences around the world.

The degree to which Ada Urban was involved in the day-to-day running of the company is unclear, but she was not involved in the production process. A snapshot portrait of her at Kinemacolor’s height is provided by William T. Crespinel, who worked for Charles Urban as technician. He recalled one of her visits to the Kinemacolor editing rooms: “Mrs. Urban was a grand lady, resembling, in physique, the famous and respected Lillian Russell. I recall she usually had a box of liquor-filled chocolates and would leave me a few when she left with the mild admonition to her husband, ‘Now don’t work too late dear.’” She also became owner in its latter years of Kineto, another of the film companies her husband had set up, which specialized in informational films. In 1914 she became co-director of Color Films, the successor to the Natural Color Kinematograph Company after the latter was voluntarily liquidated following a revocation of the patent she had purchased, which spelled the end of Kinemacolor as a viable business.

Ada Urban moved to the United States at the end of World War I when her husband relocated his businesses to Irvington, New York, and returned with him to Britain in the late 1920s when those businesses ended in bankruptcy. She owned property in London’s Half Moon Street, which supported them, but much of her money was lost when Charles Urban invested unwisely in the patent rights for a new form of metal bottle top. She died in 1937, her husband in 1942. Her involvement in film was purely financial, but she sensed the value of Kinemacolor when it was an uncertain risk and then supported the most globally significant British film venture of its time. She needs her place in the film history books.