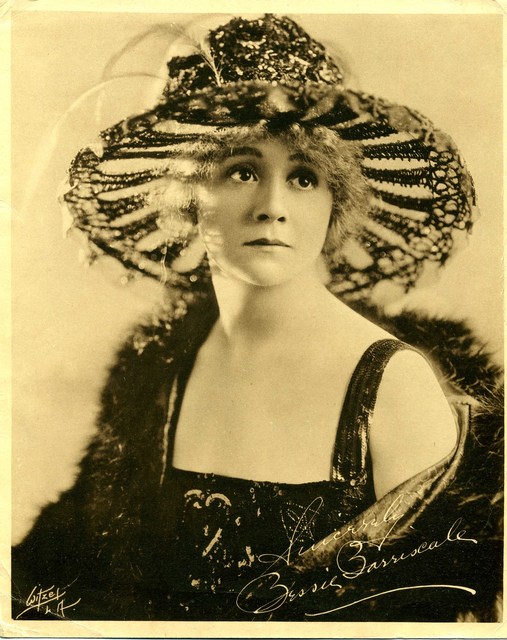 On May 1, 1917, actress Bessie Barriscale invited members of the press corps and trade papers to the Paralta Plays company offices in New York. Agnes Smith, there on behalf of the Morning Telegraph, reported on the event a few days later, confessing to her readers that she had not initially known why the press had been summoned. However, the journalist quickly realized why when she arrived and saw a new sign on the door: “The Bessie Barriscale Feature Company.” Inside the Paralta offices she found Barriscale with her husband, actor Howard Hickman, director Oscar Apfel, and producer Robert Brunton. Announcing the formation of her own company whose pictures would be distributed by Paralta, Barriscale stressed the point that “good stories [would be] her first consideration” (n.p.). The Bessie Barriscale Feature Company was to start work in a new state-of-the-art studio in Hollywood, where, according to the Moving Picture World, they hoped to produce six to eight features per year with their first project to be the still extant title Rose O’Paradise (1918) (1100). 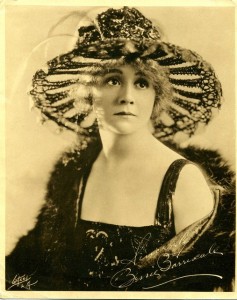 Barriscale’s career in the moving pictures had started a few years earlier when Lasky, of what was then called the Jesse L. Lasky Feature Play Company, bought the film rights to ten plays produced by theatre impresario David Belasco (Birchard 2004, 30). Barriscale, who had starred in the successful Belasco play “Rose of the Rancho” and may have originated the part of Juanita, was invited to repeat the performance in the 1914 film of the same name directed by Cecil B. DeMille, the Atlanta Constitution reported (D8). At twenty, Barriscale was already a veteran actress. She had been raised in the theatre milieu by her actress mother and had acted on the stage from the young age of five. She met her husband Howard Hickman on the stage, and the two had worked together as members of the same stock companies for years, according to a 1998 Silent Film Monthly profile.

Upon completing her first film, Barriscale and Hickman left the legitimate stage for what would be a period of seven years. According to an unidentified article in the Bessie Barriscale clippings file in the Museum of Modern Art, Thomas H. Ince had been impressed with the performance of the young actress in Rose of the Rancho and consequently brought her to work for the New York Motion Picture Company, where she stayed for three years. When her contract expired, she left the company, which had been sold to Triangle Film Corporation. While Barriscale had quickly become a major star with Ince’s company, the films she acted in were easily forgettable. 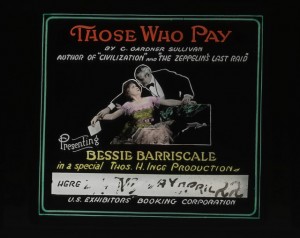 Lantern slide, Those Who Pay (1917). Courtesy of the Museum of Moving Image.

Why did Barriscale start her own company? The Silent Film Monthly profile suggests that she was unhappy at Triangle after playing in a series of insignificant films and that forming her own company at Paralta would also give more work to her husband, who had not found the same screen success as had his popular wife (2). And so, like many other actresses, Barriscale capitalized on her fame and formed her own star company. As is the case with other stars and star companies such as the Gem Motion Picture Company started by Marion Leonard and the Clara Kimball Young Film Corporation formed during what Karen Mahar has called the “Second Wave” of star companies (2006, 155), it is similarly difficult to determine Barriscale’s exact function within the Bessie Barriscale Feature Company, beyond her role as leading lady and figurehead. It is fair, however, to assume that she had script control as suggested in the Morning Telegraph (Smith, n.p.).

The Bessie Barriscale Feature Company released eight films in 1918 and from reviews, it is clear that she abandoned the ingenue role with which she had been associated at Triangle in favor of more varied, mature, and challenging parts. Hickman continued to act alongside his wife, but also started directing her in films such as The White Lie (1918), which caused Wid’s Daily to joke, “It looks as though the Los Angeles ‘Only Their Husbands’ Club was due to lose a member to the M.P.D.A. ’cause dog-goned if ‘Mr. Bessie Barriscale’ doesn’t put this one over like he had been directing all his life” (29). 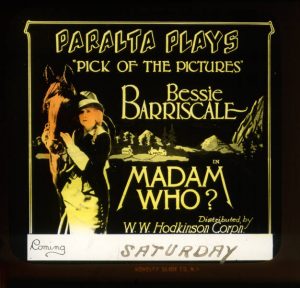 About a year and a half after the start with Paralta Plays, the Moving Picture World announced that Bessie Barriscale would withdraw from the Paralta program after the release of the film The Heart of Rachael (1697). An item in the Museum of Modern Art clipping files explains that Paralta had only achieved restricted distribution for Barriscale’s films, which would explain why in 1918 she changed distributors, continuing with the Robertson-Cole Company. In November that same year, the Los Angeles Times announced that due to a change of management, Bessie Barriscale’s company would undergo a slight name change, now to release pictures as B. B. Features, sometimes referred to as B. B. Productions. Howard Hickman would be the new president, and Bessie Barriscale would be in charge of finances and the script selection (III1).

Between 1918 and 1921, B. B. Features produced and released a total of sixteen titles of which none are known to have survived. Reviews in newspapers and trade journals provide some information about the films the company produced, including the great variety of roles Barriscale played. The first release of Barriscale’s second star company was Two-Gun Betty (1918), a mélange of comedy and Western in which Barriscale plays a girl (Betty) who—dressed as a cowboy—seeks employment on a ranch. While Betty’s disguise fools no one, she is hired as a help. The Variety review describes how the ranch cowboys decide to have some fun with the new help, giving “him” challenging tasks, all of which “he” skillfully masters, including swinging the lasso and capturing a “bad man” (“Two-Gun Betty” 44). Other B. B. Features releases include A Trick of Fate (1919) featuring Barriscale in a dual role as a “naughty Parisian dancer” and what one review described as a “Southern girl of a long and illustrious line” (1383). In Her Purchase Price (1919), Barriscale plays a woman who was kidnapped from England as a child by a desert pirate, brought up in a harem, and sold on an auction block, all considered “splendid” by the Exhibitor’s Trade Review (1179).

Not all of Barriscale’s films were so well received, however, and in fact most received unfavorable reviews. The Notorious Mrs. Sands (1920), for example, was panned in Variety: “An alleged high society drama, a story that is weak to the point of absurdity and badly directed. Would be sniffed at in a high class house, but can get by in the cheaper run theatre” (37). In A Woman Who Understood (1920), Barriscale played the part of an altruistic woman who sacrificed herself for her family, but the Variety reviewer criticized the film for being dull, concluding: “Pep. That seems to be the most needed asset to the feature, but it is absent” (54). Other films that received only lukewarm reviews include The Woman Michael Married (1919); Kitty Kelly, M.D. (1919); and Hearts Asleep (1919).

The public persona Bessie Barriscale developed over the course of her career was based on her wholesomeness and traditional values. Indeed, there is a plethora of articles focusing on the happy and harmonious family life she shared with her husband and son. Perhaps her traditionalism explains why the Motion Picture Magazine in 1916 invited Barriscale to comment on the moral reputation of the motion picture industry, which she did in an article titled “Does Immorality Exist in the Studios?” Answering the question of the article title in the negative, Barriscale writes that the motion picture industry is no more immoral than any other industry, but what was different about it was the scrutiny it received. As she wrote, “the fierce light of publicity shines constantly upon the photoplay folk,” producing a situation in which “[t]heir every act is the subject of observation” (79). By 1921, Barriscale’s screen career was over. Perhaps a result of what seems to have been only a mild success with her own companies, Barriscale left the screen. She did not, however, retire, but returned to the stage where she and Hickman together continued to enjoy long careers.

While we can assume that Bessie Barriscale, in addition to acting, was involved in the financial aspects of the productions by her companies, and to a lesser degree story development, this is difficult to ascertain as most titles are missing, and since her work beyond acting in the extant titles is uncredited, it is not reflected in the filmography.