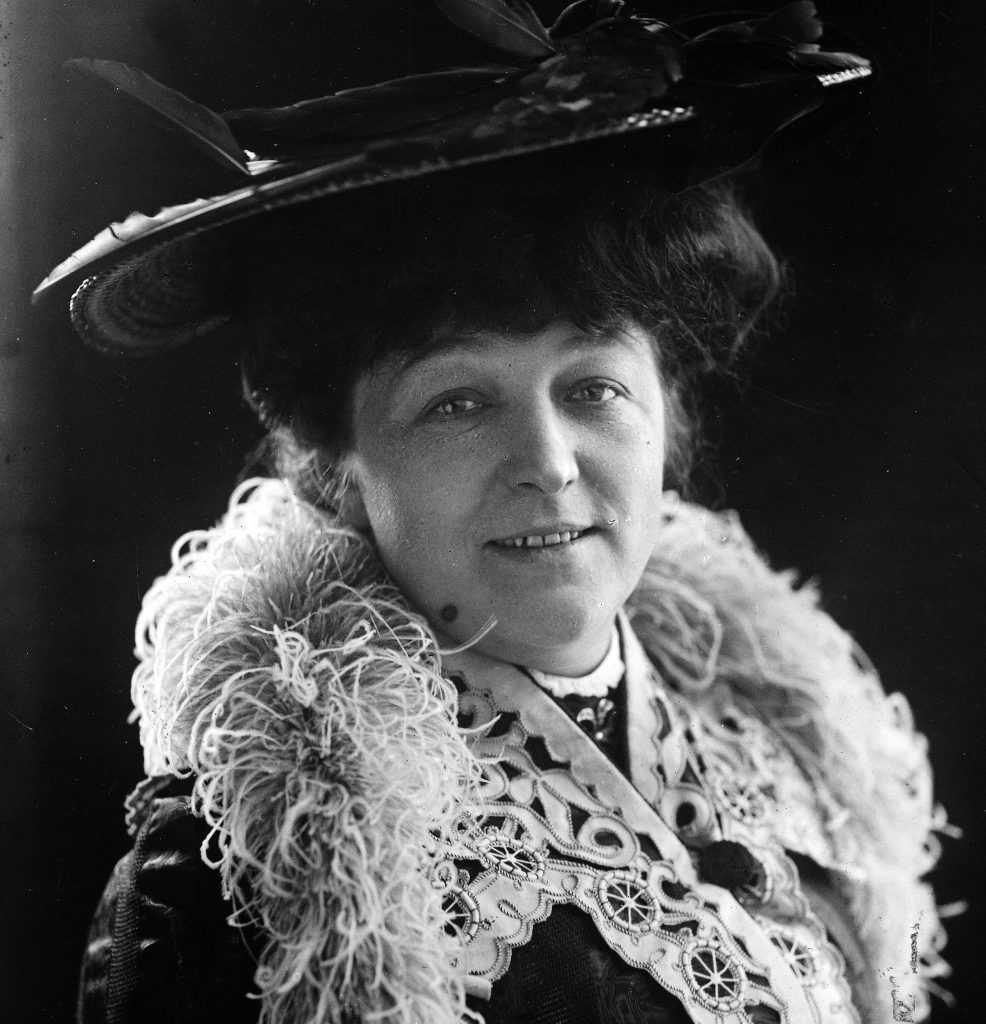 Anna Hofman-Uddgren was a Swedish actress, vaudeville artist, scriptwriter, theater director, and film director. When she became the first woman film director in Sweden in 1911 she was already a well-established profile within the entertainment business in Stockholm. Hofman-Uddgren’s film involvement was not limited to production. Already in the summer of 1898 she introduced moving pictures, shown by a Mr. Hough from Edison’s Wargraph, at the variety theater Sveateatern, located in downtown Stockholm, and the following year, after Sveateatern had been destroyed in a fire, Hofman-Uddgren programmed moving pictures at Victoriateatern from May onwards (Waldekranz 1983, 117). Around a decade later, during a short period in 1911-1912, she directed six films of which only one survives. A possible reason for Hofman-Uddgren’s relative oblivion might be that the surviving film from her productions, Fadren/The Father (1912), based on August Strindberg’s drama, is a rather static example of filmed theater.

Hofman-Uddgren’s biographical background is filled with gaps and blanks. Rumor has it that Anna Maria Hammarström, her name at birth, who was raised by a single mother, was actually the daughter of Oscar II, King of Sweden and Norway. As Marika Lagercrantz argues, this is probably why Hofman-Uddgren avoided giving out any biographical information and thereby could form her own star persona (Lagercrantz 2009, 186-192). Hofman-Uddgren nevertheless started to write her memoirs in the 1920s. Only the very beginning of her biography has been found, consisting of four typewritten pages describing her first encounter with the King at the age of seventeen, although it remains in a private collection. Even though the King would finance her studies in Paris, as these pages reveal, it was not until after Hofman-Uddgren’s death that any of this information was published (Lagercrantz 186-189).

All of the films produced in the 1911-1912 period seem to have been commissioned by Stockholm’s leading film exhibitor (having as many as six theaters) and distributor, the former horse-dealer, N.P. Nilsson, who wanted domestically-produced films for his theaters to compete with other Swedish producers. Together with Otto Bökman, an experienced film photographer, Hofman-Uddgren made six motion picture films. Gustaf Uddgren, a well-known journalist and writer whom Anna Hofman had married in 1900, would become another of her closest collaborators during these film productions. He is credited with writing the film script for Fadren, Fröken Julie/Miss Julie (1912) (together with Hofman-Uddgren), Stockholmsfrestelser eller Ett norrlandsherrskaps äventyr i den sköna synderskans stad (1911), and the scenario for Systrarna/The Sisters (1912).

In the spring of 1911, during a heated debate about the importance of film censorship, Nilsson was highly criticized in the daily newspapers by Walter Fevrell, president of a pedagogical association known as Pedagogiska sällskapet, for showing lurid Danish and French sensational films depicting decadent urban nightlife. Fevrell also reported Nilsson to the police, which was the local censorship authority in Stockholm before December 1911 when a national censorship body, Statens biografbyrå, was established. Additionally, Fevrell had apprehensions about Nilsson’s first production, which would also be Hofman-Uddgren’s first film—the comedy Stockholmsfrestelser eller Ett norrlandsherrskaps äventyr i den sköna synderskans stad (Björkin 1997, 17-20). The film opened in April 1911 at Nilsson’s largest film theater, Orientaliska Teatern in Stockholm, and could be understood as a long commercial for the city itself and what it had to offer, which included a shopping expedition to the foremost fashion shops, a series of sights from Stockholm, as well as numerous well-known local personalities. Stockholmsfrestelser was advertised as the first Swedish one-hour film drama, featuring popular actors from the Stockholm theaters. Reviews in newspapers like Dagen and Dagens Nyheter extolled Stockholm’s consumerist offerings and praised the well-known actors. In line with prevalent practices of the time, Hofman-Uddgren was not mentioned in either the newspaper advertisements or reviews, but instead her famous husband, Gustaf Uddgren, is singled out as the man behind the production. Several actors made their film debut in Stockholmsfrestelser, amongst them were Gösta Ekman, who would become one of the big names of theater and film and a director himself.

Hofman-Uddgren’s next two films, Blott en dröm and Stockholmsdamernas älskling, both made in 1911, continued the formula of “city films.” They depicted Stockholm’s most attractive sights, emphasizing the local character and Swedish origin of the productions, and featuring well-known performers. Carl Barcklind, an immensely popular singer and actor, had, for example, the leading role in Stockholmsdamernas älskling and was prominent in the advertisements.

Hofman-Uddgren would not only become Sweden’s first woman film director, but she also directed the first adaptions of August Strindberg’s literary work Fröken Julie and Fadren. The two dramas were at this time very popular on the stage and thus considered a safe investment and a way to improve the standing of Nilsson’s film theaters. Apart from using renowned stage actors for films in feature format, adapting famous literary works was a strategy during this period through which directors could achieve legitimacy and thereby attract an audience of higher standing; i.e. the middle class. Both films were of considerable length for their time; Fröken Julie was 732 meters after a cut of eighteen meters by the censors and Fadren was 777 meters, and both featured actors from Strindberg’s Intima Teatern. Hofman-Uddgren, together with her husband, who knew Strindberg well, secured the film rights for all of Strindberg’s dramas. In an article in Film-Journalen, Uddgren recalled Strindberg’s sympathetic attitude towards the new and rather undeveloped film medium at the time, as well as how they secured the film rights to all of his dramas without paying any fee (Uddgren 1920, 171).

According to Rune Waldekranz, Fröken Julie was, together with Systrarna, Hofman-Uddgren’s principal achievement as film director. In contrast to Fadren’s somewhat static and theatrical appearance, these films allegedly explored the medium’s possibilities of editing and change of scenes. Systrarna had a more serious topic than the first films and was based on an original story written for film by Elin Wägner about two sisters with contrasting moral conduct, and a rather detailed film script describing characters, sets, and atmosphere has survived (Waldekranz 118).

Fadren seems to have been the least successful of the screen versions of Strindberg’s dramas. As the funding for the film was scarce, all the interior scenes were shot outdoors in late fall of 1911. The need for daylight came with a drawback: the breath of the freezing actors became visible. Similarly, seemingly by accident, a journalist from the newspaper Dagens Nyheter passed the Fröken Julie set during shooting on a chilly day in November 1911, resulting in one of the first film production reports in Sweden (Olsson 1990, 258-259). Ernst Klein, writing under the pseudonym “Selim,” vividly describes the change of scenes from a cold quiet countryside to a scene of thinly dressed country people dancing in the celebration of Midsummer. The journalist cautiously approached, fearing mental derangement, only to find Hofman-Uddgren in the midst of directing a scene (1911, 1). In Klein’s interview, Hofman-Uddgren underlines the significance of finding the right outdoor environment for the scenes and complains about the insufficient funds, as the shooting was not easy when it snowed on the tables and the actors were frozen stiff (1).

The reviews of Fröken Julie were very mixed. The most enthusiastic was probably written by “Dorian,” a pseudonym for Uddgren himself, who wrote about a preview of the film in Stockholms-Tidningen and commented on Hofman-Uddgren’s accomplishment in adapting the drama to the silent film medium (1912, n.p.). Criticism in Aftonbladet and Social-Demokraten focused mainly on the lack of words and the added scenes, among them Julie’s suicide, which was only hinted at in the play but made explicit in the film. Some years later Uddgren claimed that the film was a success in the way it captured the spirit of Strindberg’s play (1920, 171). But even Uddgren himself considered Fadren flawed as it suffered from the lack of respect the actors showed the film director. Even if a valuable document of the acting style at Strindberg’s theater, the film is ultimately an example of filmed theater. The reviews of the two Strindberg adaptions were mostly harsh, pointing out the sacrilege of turning the famous author’s work into wordless moving pictures. Even though the film rights to Strindberg’s dramas were granted without stipulation, Fadren became Hofman-Uddgren’s last film. Shortly after the opening of the film in 1912, her financier, Nilsson, died. After that she returned to the theater only to contribute to a couple of film productions as an actress.

See also: “Decoration, Discrimination and ‘the Mysteries of Cinema’: Women and Film Exhibition in Sweden from the Introduction of Film to the Mid-1920s”

1. Anna Hofman-Uddgren as Director and Actress

3. Anna Hofman-Uddgren as Director and Screenwriter