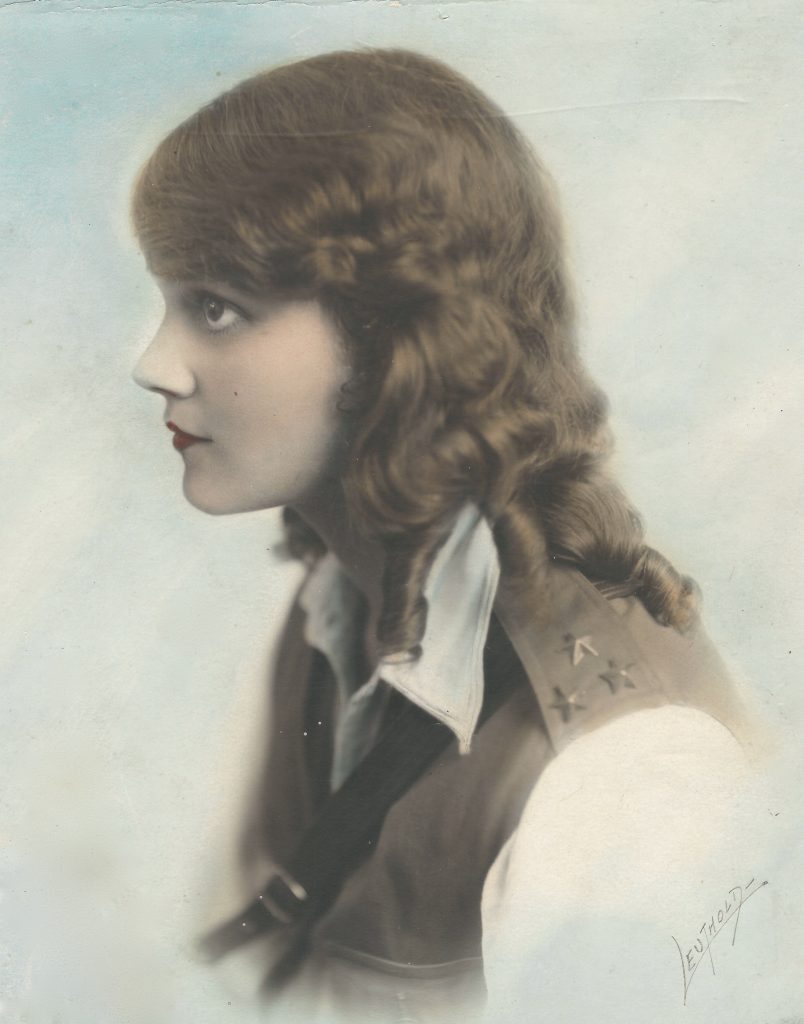 A traveler, adventurer, and filmmaker, Aloha Wanderwell Baker’s career spanned over twenty-five years and took her to over fifty countries. Heralded in the promotion of her lectures as “the world’s most widely travelled girl,” Aloha participated in the production of eleven travelogues from 1921 until approximately 1952. She presented these films with live lectures across the United States and internationally. The travelogues ranged in both length and style, reflective of the changing practice of travel lecture filmmaking in the first half of the 20th century and Aloha’s own evolution from crew member to producer-director. 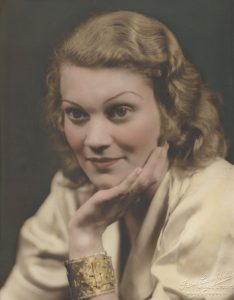 Idris Galcia Hall was born on October 13, 1906 (or 1908) in Winnipeg, Canada to Herbert and Margaret Headley Hall. After Herbert was killed in action as a British Army reservist during the first World War, Margaret and her two daughters, Idris and Margaret, or “Meg,” moved to France. While in France, Idris became aware of the Wanderwell Expedition led by self-proclaimed “Captain” Walter Wanderwell (né Valerian Johannes Piecynski), a Polish expat who was participating in an automotive endurance race. Walter had started this race in 1919 with his first wife Nell Wanderwell (née Miller). However, by 1921 Nell and Walter had separated, and Walter needed a new star for his travelogues. According to Aloha’s memoirs, Walter advertised his search for a secretary to join his expedition team, and his ad in the French Riviera edition of The Paris Herald specified that she have “brains, beauty and breeches” (Boyd 2013, 1). With excitement and the blessing of her mother, Idris joined the expedition in 1922, and adopted the new stage name Aloha Wanderwell. 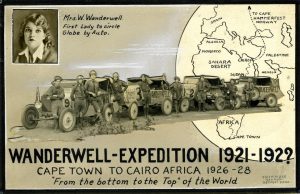 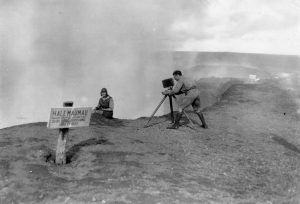 Aloha participated in the production of four travelogue films while working with Walter Wanderwell: With Car & Camera Around the World (1919-1929), The Last of the Bororos (1930-1931), Flight to the Stone Age Bororos (1930-31), and The River of Death (1934). For these films, Aloha was sometimes actress, director, cinematographer, or editor. Indeed, rather than be limited to rigid production roles, all of the Wanderwell expedition crew served in different capacities–working together to complete and present their travelogues and lectures. The first feature Aloha worked on, With Car & Camera Around the World (hereafter Car & Camera), follows Aloha, Walter, and their crew on a worldwide expedition from 1921 to 1929. The footage is comprised of sequences taken in North America, Europe, Africa, the Middle East, and Asia. Unlike many other travelogues of the time, Car & Camera was a constantly evolving production; material would be developed and edited while traveling, and financing would largely come from local businesses. In a 1982 interview with American Cinemeditor, Aloha explained, “Our motion picture editing was done in our hotel rooms. Rewinds consisted of pencils held through the hubs of reels. […] We would barter with local merchants and Ford dealers for gas and services in exchange for endorsing their products during our stage performance. It was a ‘finance as you go’ expedition” (4). As a result, Car & Camera was edited to target specific audiences and to match the demands of different venues, with a running time that would range anywhere from nine to ninety minutes.

Aloha and Walter Wanderwell with expedition vehicle and Chango the monkey. Courtesy of the Richard Diamond Trust.

In December 1924, Aloha and the expedition crew arrived in the then-U.S. territory of Hawaii. By this point, they had traveled to China, Egypt, France, Germany, India, Italy, Japan, the Netherlands, Palestine, Poland, Portugal, the Soviet Union, Spain, Sudan, Switzerland, Turkey, and Yemen. In early 1925, Aloha and Walter arrived in the continental United States and were married on April 5, 1925 in Riverside, California. A few months later, their arrival in Detroit, Michigan marked the official end of the world tour Walter had started in 1919. While in Detroit, Aloha and Walter put together the first “complete” version of Car & Camera for the U.S. lecture circuits. By December 1926, Aloha, Walter, and the crew had departed for South Africa for another expedition, this time from Cape Town to Cairo, Egypt. Aloha and Walter had two children, Valri (born 1925) and Nile (born 1927), and they continued traveling and filming for Car & Camera until 1929 before planning for their next travelogue film and expedition. Aloha would later recount her experiences while making Car & Camera in her 1939 published memoir The Call of Adventure. 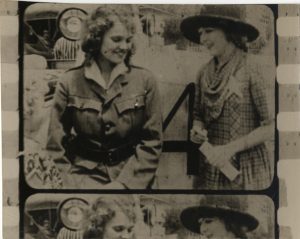 Aloha Wanderwell with Mary Pickford, With Car & Camera Around the World (1919-1929). Courtesy of the Richard Diamond Trust. 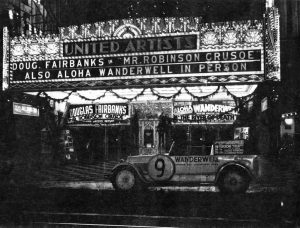 In addition to participating in world tours and lecture circuits, Aloha and Walter saw the expedition as a platform to promote their political views and interests. In 1919, Walter founded the “Work Around the World Educational Club” (hereafter WAWEC) and its subsidiary the International Police. He saw these organizations as part of the larger worldwide efforts for peace through education and disarmament. When Aloha joined the expedition in 1922, she became involved with these causes. The Richard Diamond Trust holds a personal journal entry, from December 1923, where Aloha described Walter’s intentions for WAWEC thusly: “Cap [Walter] flung himself into work on a Peace Plan we were to create interest for, as we covered countries. Cap decided to devote much of his future to publicizing a practical solution to the supervision and control of the manufacture and distribution of armaments. He proposed an elite Corps–the International Police with the slogan For God and All Countries” (n.p.). Their efforts were not lost on the press. In 1926, Variety reported on the Wanderwells: “[The Wanderwells] are a bevy of men, all in the uniforms of the International Peace Police force; men from different nations who volunteered for the world-wide tour under Captain Wanderwell’s direction. For the long motor trip made in Fords the caravan carried machine guns and camp equipment that makes the cars appear all the more conspicuous” (82).

Aloha’s personal and professional collaboration with Walter Wanderwell would last until his death in 1932. Walter was murdered on the yacht Carma that he and Aloha owned on December 5, 1932 in Long Beach, California. Aloha was in Los Angeles at the time, and despite an extensive police investigation, Walter’s assassin was never found and the crime remains unsolved. 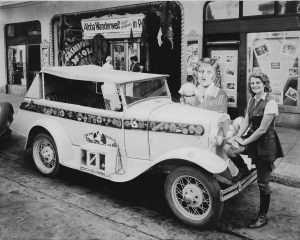 Aloha Wanderwell with expedition car, circa 1934. Courtesy of the Richard Diamond Trust.

On December 26, 1933, Aloha married Walter Baker, whom she met in Laramie, Wyoming. Their first professional collaboration as a couple was the travelogue To See the World By Car (1937)–a film that revisited many of the sites that Aloha had traveled to with Wanderwell. To See the World By Car is more stylistically polished than Car & Camera. However, the film recycles some shots made during Aloha’s earlier expedition.

Aloha and Baker next collaborated on Explorers of the Purple Sage (1945), which features the flora and fauna of Wyoming with sequences of ranching, horseback riding, and a wild horse round up. In the horse round up, they captured the only known footage of the stallion known as “Desert Dust.” The couple’s later World War II rallying efforts, India Now (1942-44) and Australia Now (1940-1944), were produced with the cooperation of local governments and businesses and utilize those institutions’ footage. In the post-war period, Aloha continued filmmaking and lecturing. Her final films were Victory in the Pacific (1945), My Hawaii (1949), and Magic of Mexico (1950).

After the production of her final films in the late 1940s into the 1950s, Aloha refocused her attention to preserving and promoting her legacy. As early as 1931, Aloha and Walter Wanderwell had presented Aloha’s personal story in Hollywood with the hopes that it would be picked up as a feature film. While they were ultimately unsuccessful in securing a film deal with a studio, Aloha continued to work to preserve her legacy long after Walter Wanderwell’s death and her retirement from filmmaking.  Indeed, Aloha recognized the importance not only of her place within history, but the historical significance of what she had captured on film. She carefully preserved the films and artifacts from her travels, and additionally arranged for her vast collection of films, photographs, journals, letters, and artifacts to be distributed across a number of museums and archives in the United States. 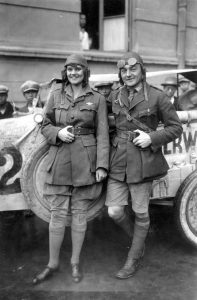 Aloha and Walter Wanderwell in front of the expedition vehicle. Courtesy of the Richard Diamond Trust.

In 1982, Aloha gave her last public performance as a travel lecturer at the Natural History Museum in Los Angeles, California for family and friends. As with her earlier performances, Aloha appeared in the complete expedition costume and lectured alongside her travelogue films. Aloha died on June 3, 1996 in Newport Beach, California. Aloha’s remarkable life and career endure as a complex example of the power of self-invention, marketing, and a woman who defied the limitations of her era.

Linville, Heather. “Across the World and Back: Rare 1920s and 1930s Footage from Aloha Wanderwell Baker.” The Academy of Motion Picture Arts and Sciences (March 2015): n.p. http://www.oscars.org/news/across-world-and-back-rare-1920s-and-1930s-footage-aloha-wanderwell-baker