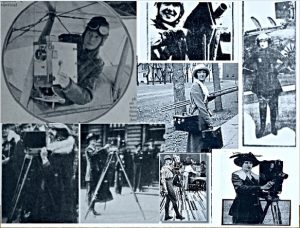 The phrase “camera maid” seems to have originated in the late teens and early 1920s with the Fox Newsreels’ publicity department, who used it to announce the hiring of female camera operators. Women cinematographers in the silent era remain an under-researched area, especially compared to what has been uncovered about the many women who worked as directors, producers, and screenwriters during the period.

Challenges in Validating Data: The Conundrum

While many US trade journals and newspapers referenced the activities of these “camera-maids,” very little extant data exists today to confirm their efforts. Building a fuller picture of their work has thus proven to be a challenge. Many of these women had short careers, so official records tend to be spotty at best. US census records, another valuable resource, have been helpful to confirm the occupations for some women, but only represent a sliver of information captured every ten years. That so much early cinema is lost today also makes discovering more about these women difficult, especially since, in many cases, camerawomen were working for smaller or independent companies and/or not credited in any formal way, which means there is very little known surviving material to reference. We know these women existed, but we also know that much remains unknown about them today.

In order to encourage further exploration, the following research uses this conundrum as a starting point, and presents what I have found in my research in trade journals, newspapers, census records, and other resources, as well as what remains unknown about a handful of confirmed and unconfirmed US-based “camera-maids.”

The following table includes names of camerawomen that have been confirmed through the various sources mentioned above. “Years Active” in the following table and individual slides refers specifically to each woman’s time as a camera operator, although many of these women were involved in the film industry for a longer period of time (noted in the slides as well). In both cases, these dates are best estimates, based upon available research.

What We Know vs. What We Don’t Know

There is much research still to do. US census records, for example, offer tantalizing clues about other women who may have also been camera operators during the 1910s and 1920s.

The following table includes names of women who may have worked as a camera operators, but whose work still needs to be verified by other sources. I found these names in both newspaper articles and by searching census records for 1900, 1910, and 1920, continually modifying the search fields and making sure all searches were for the female gender. I kept narrowing the focus in occupation: photographer, motion picture, moving picture, cinema, etc. Of course, since the census is every ten years, I am likely missing women in the time in between. It is very tedious work, but it has yielded some potential results. The next step is to research each person individually to see where it leads.

These confirmed and unconfirmed names exemplify the “camera-maid conundrum”: on the one hand, many women worked as camera operators during the early motion picture industry. However, on the other hand, with every new tidbit of information, we are made aware of the fact that much remains unknown about these women. We are certainly challenged not only by the paucity of extant material, but by the lack of verifiable personal data. Since, in general, the careers of “camera-maids” were limited in scope, and they worked during a period when credits for this work were not routinely published, the trail often goes cold quickly. While the results thus far have been uneven at best, my research continues. My focus will now shift to more regional sources in the hopes of excavating more details.