Alice and the Too Many Mattresses 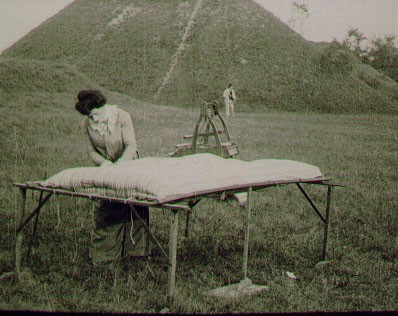 With the release of the documentary Be Natural: The Untold Story of Alice Guy-Blaché (Pamela Green, 2018), it is certain that Alice Guy Blaché will now be heralded as the motion picture innovator that we in the field have always known her to have been. But the claim that the documentary makes—to Alice’s originality and imaginativeness—should please us and then immediately worry us as historians of the first decade of cinema. For the claim that Be Natural makes to Alice’s originality is made at the expense of the resourcefulness of that moment. For example, one of the titles that has been singled out for acclaim—even before Alice’s memorialization in the documentary—is Le Matelas épileptique/The Drunken Mattress, a film that she has been credited with having produced and directed at Gaumont in 1906.

The Drunken Mattress and Alice’s Memory

I have written elsewhere about the differences between Alice’s memory and her several extant cabbage fairy films, and established that her memoirs, written between 1941 and 1953, do not exactly correspond to extant film titles (Gaines 2018). With that in mind, here is the crucial passage on the The Drunken Mattress:

Searching for a setting for a film La Pègre de Paris, I walked along a part of the old fortifications which still existed in those days. A mattress-maker had installed her frame for stretching the canvas. She finished filling it with wool which she had just carded. For I know not what reason, she left her work and went away for a few minutes. Almost at once a drunk arrived, climbed the mound and rested in contemplation before the half-finished mattress.

This little tableau suggested the idea for a film [Matelas alcoolique, 1906] which later had a great success. Here is the scenario:

“Some days before his marriage, a young man left his mattress with a mattress-maker who promised to put it in excellent shape before the wedding night.”

I reconstructed the scene I had witnessed but in my story,

the wine-loving drunk really lay down in the bed and was completely buried. The mattress-maker, unsuspecting, returned and finished her work. A porter arrived, loaded the mattress on his cart and left in haste. The drunk, half-wakened, stirred, upsetting the balance and there was a series of tumbles down the stairways of Montmartre, across a little bridge, near a washhouse, into a urinal, etc., always followed by the unfortunate porter. The young couple waited impatiently for the mattress. Finally, it arrived. The exhausted porter flung the mattress on the bed-spring, pocketed his tip and fled.

In haste, the newlyweds made the bed and prepared to pass an agreeable night. The drunk, inconvenienced, began a series of jumps. The distracted couple cried for help. The police of that era came running and led the lovers and the mattress to the police station. All was finally explained and the drunk went to finish his nap in a cell (36-37).

We’ll get to the discrepancies between the film that you just saw and Alice’s recollection of having seen a mattress-maker and a drunk eyeing her comfortable mattress—but not climbing into it. But first, let’s note an 1888 cartoon published in La Caricature. Here, two men dump a third into a mattress which he then brings to life, terrifying the mattress-maker but not the gendarme before whom he sheepishly drops his mattress disguise: 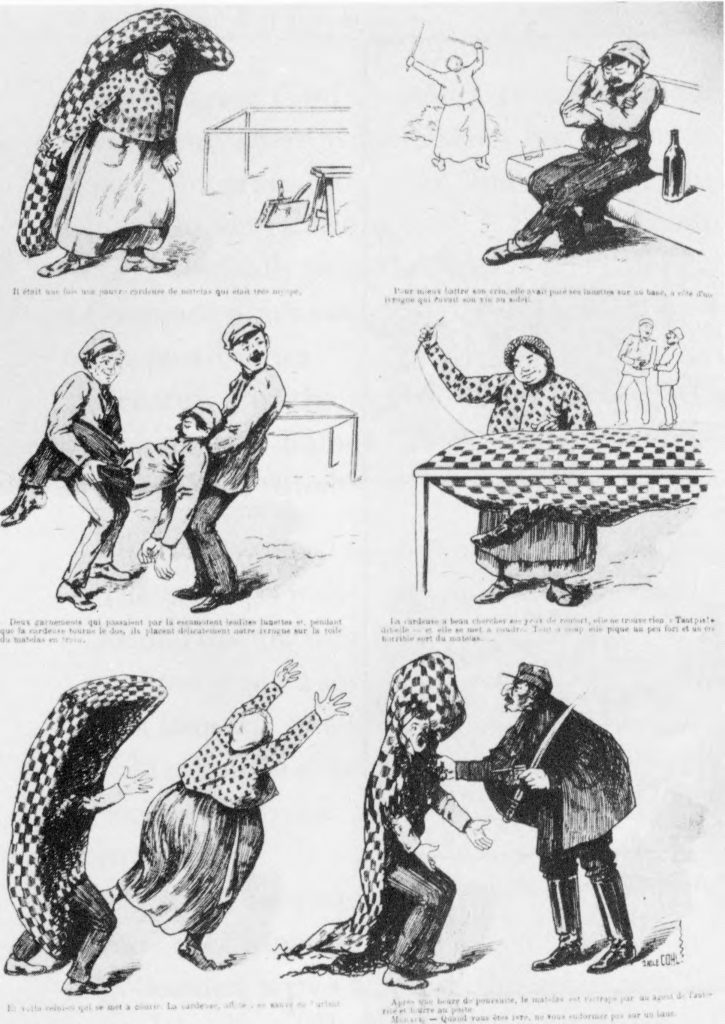 Here, to counter Alice’s claim to have actually stumbled onto the drunk eyeing the mattress on the street one day, is the Georges Méliès film The Tramp and the Mattress (1906), whose release in May is earlier than the September release of what Alice recalled as Le Matelas alcoolique, but not Le Matelas épileptique.

Here, we have what we might call “identical twin gags.” If I am not mistaken, this is the same gag in films shot and released in France the same year. The rule of thumb in this period of wild invention and theft: one good gag begets another that is likely to be the same gag. Let’s not fail to notice that Alice’s cross-dressed maid is more funny than the one on the left.

Here, in the Italian version, retitled for the Dutch market, from 1912 (middle clip), we have the running mattress gag with the boy substituted for the maid. But it is the same “drop the mattress from the window” gag only 6 years later.

Finally, to the issue of the drunken mattress in the bridal suite. Again, if we are not mistaken, we see here a scene that corresponds with Alice’s description of two lovers getting into bed from her memoirs. But the newlywed lovers are not in the Gaumont film, they’re in the Pathé film. Alice’s Gaumont title features an elderly couple who get into bed with the drunk in their mattress and are shocked to find a man in bed with them. Could it be that Alice saw either Pathé’s The Bride’s Mattress (1906) or Méliès’s The Tramp and the Mattress Maker sometime in 1906? Later, while writing her memoirs, she may have mis-remembered where it was that she had seen the scene. The writer-director-producer who was so squeamish about the term “midwife” that she objected to the title Gaumont gave her 1902 film (Gaines 55) would likely not have shot this risqué honeymoon night. Then again, anyone who has seen either La femme collante/The Sticky Woman (Gaumont, 1906) or Les Résultats du féminisme/The Consequences of Feminism (Gaumont, 1906) would not deny that before she was a married woman Alice was making awfully suggestive films in the best French comic tradition.

My experiment is not intended to challenge Alice’s originality. Perhaps, however it is meant to challenge the critical acclaim she is suddenly enjoying, which, predictably, is based on an idea of “originality” borrowed from high art. That Alice was resourceful and imaginative, I do not dispute. As historians of mass culture, however, we cannot seek to elevate one work over another on this basis. The point is that we do not want to elevate Alice to the detriment of early cinema, which those of us who have seen so much of know to be full of endless variation, but also fascinating similarities. These very repetitions call for serious study. The key to my point is that they all copied each other–from stage to film to film to film and back again, and that is how popular culture has been and still is sourced.

A version of this material was originally presented at the Women and the Silent Screen X conference in Amsterdam in May 2019. Thanks to Insook Park and Kate Saccone.