On June 13, 2019, attend the unveiling of a new historical marker for filmmaker Lois Weber.

“She’s the North Side original and influential woman pioneer in early film making you may have never heard of!

Celebrate Lois Weber’s 140th birthday with the unveiling of a new historical marker outside the Carnegie Library of Pittsburgh’s Allegheny branch during the day, then join the History Center in the evening for a special conversation between acclaimed actor and Turner Classic Movies host Illeana Douglas and film historian Shelley Stamp. 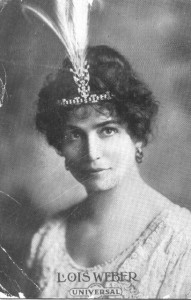 At 2 p.m., join Illeana Douglas, representatives from the Pennsylvania Historical and Museum Commission, and the Heinz History Center for the unveiling of a new state historical marker outside the Carnegie Library of Pittsburgh – Allegheny branch.”