The Danish Film Institute announced in December 2018 that their entire Danish silent film heritage will now be digitized and disseminated! 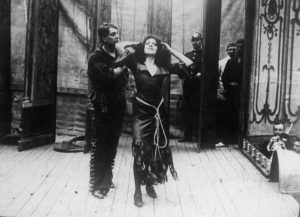 “One of the most important chapters in Danish film history will now become available thanks to a donation of DKK 30 million from the A.P. Møller Foundation, the Aage and Johanne Louis-Hansen Foundation and the Augustinus Foundation.

From around 1910, the Danish film industry was a world leader, both commercially and artistically, with Nordisk Films Kompagni (now Nordisk Film) at the forefront. Stars like Asta Nielsen, Valdemar Psilander and Fy & Bi were famous way beyond their home country, and Denmark’s greatest film director, Carl Th. Dreyer, was prolific during this period as well. When sound films gained ground in the early 1930s, production companies scrapped their inventories of silent films. Only an estimated 20% of the Danish silent film production exists today.”