The increasing momentum of Digital Humanities (DH) in many fields compels consideration of a new interrelation or conjuncture with Cinema and Media Studies (C&MS), or C&MS/DH.

Background: In 2009, the number of panels on Digital Humanities spiked at the Modern Language Conference, and the Society for Cinema and Media Studies began featuring Digital Humanities workshops around 2013. But what is Digital Humanities? According to Columbia Assistant Professor of English Dennis Tenen, Digital Humanities began as “computational humanities,” but has morphed into a “project-based” research and scholarship model that borrows methods from the social sciences. Major research universities have invested in Digital Humanities initiatives on the assumption that computational methodologies are field-transforming for many academic disciplines. Cinema and Media Studies, however, is unlike the traditional humanities. Founded in the 1960s, Cinema Studies, as it was then called, was less interested in transforming existing fields of knowledge than in founding a separate discipline outside literary studies and art history. Beginning with the serious study of motion picture film production, closely connected to the making of audio visual works, the field has always had an eye on machine-made art as well as technological change. Not surprisingly, experiments in computational data-mining began in the field in the 1990s with initiatives at the University of Southern California School of Cinema-Television (now Cinematic Arts), pre-dating the formulation of what is now called Digital Humanities.

The challenge of scholars trained in Cinema and Media Studies today is to configure the “death of cinema?” as a historical question relative to emerging platforms and new industries of exhibition and production. In a perfect twist, scholars trained in critical theory themselves become media-making producers in order to both quantify and extrapolate. Or, beginning as film and video makers who became theorists, they return to their production roots. What then is the special relation of these researchers to what are now called Digital Humanities projects? 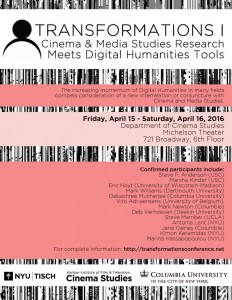